Jeong-Oh Lee, Emeritus Professor of Mechanical Engineering, died of his chronic disease on June 15, 2007 at his age of 76.

Particularly, he played key roles in vitalizing Daeduk Research Complex (DRC) by planning and executing the movement of government-funded institutes despite the inactive research atmosphere in the early 1980s. He also set up the Extended Council for Technology Promotion, consisting of many distinguished persons from diverse fields under the supervision of the President, to make significant contributions to the promotion and spread of technology innovation among governmental and civil enterprises. He received Cheongjo Geunjeong Medal in 1985 and never stopped his devotion to the education of young students even after his retirement in 1997. 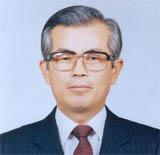