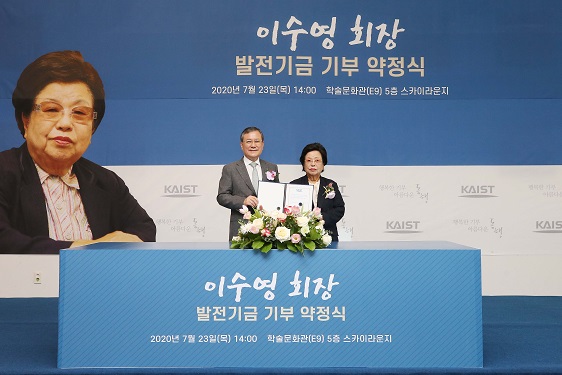 < President Shin and Chairman Lee pose after the signing of the donation at KAIST on July 23. >

KAIST Development Foundation Chairman Soo-Young Lee made a gift of real estate estimated at approximately $57 million on July 23. This is the largest donation KAIST has received since it was founded in 1971.

The fund will establish the “Soo-Young Lee Science Education Foundation” and the proceeds of the foundation will go to the “Singularity Professors” as necessary resources to help make discoveries and design new approaches to accelerate breakthroughs.

“KAIST should be the institute that will produce first Korean Nobel laureate in the field of science. I hope this fund will be utilized to enable Korea to stand out in this challenging time by accomplishing breakthroughs nobody has never imagined,” said Chairman Lee during the donation ceremony at KAIST’s campus in Daejeon.

This is Chairman Lee’s third donation following the $6.7 million donation in 2012 and the $830,000 donation in 2016. Chairman Lee began her career as a journalist in 1963. In 1981, she started her own business by launching Kwangwon Ranch and became a successful businesswoman. In 1988, Chairman Lee established the real estate company Kwangwon Industries. After receiving an honorary doctorate from KAIST in 2012, she has served as the chairman of the KAIST Development Foundation from 2013. Chairman Lee expressed her intention to make another donation to KAIST in the near future during the news conference.

“People matter most for advancing the world. KAIST has a very distinct mission to foster the brightest minds and will drive the nation to move forward. I have worked with KAIST for quite long time so that I have a strong belief that KAIST is the one that will not only make contributions to Korea but also to all humanity,” she explained.

“For example, about one-fourth of the R&D manpower at Samsung Electronics is from KAIST. In 2019, Samsung Electronics recorded a revenue of approximately $206 billion which accounted for about 16% of national GDP. KAIST is the one that fosters global talents who are working at global company such as Samsung and many others.”