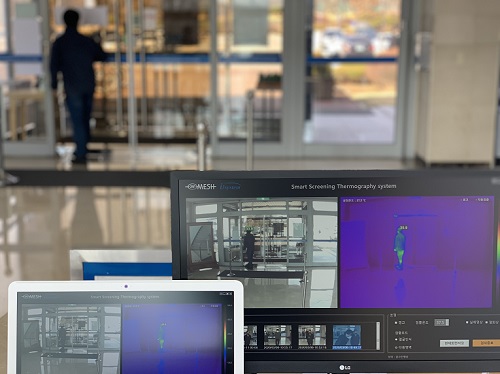 < Fever monitors are installed at the university headquarter lobby and eight other buildings including dining halls, library, and day care center. >

All classes of undergraduate and graduate courses will go online from March 16 in a protective measure for the KAIST community to slow the spread of COVID-19. No decision has yet been made for how long the online classes will last. The spring semester will start two weeks later than scheduled due to the outbreak of the COVID-19.

For online classes, professors are uploading their taped class video clips onto the KAIST Learning Management System (KLMS). These classes will be conducted in both real time and on demand. The video conferencing solution Zoom will be employed for real-time online classes, and professors and students will interact using the bulletin board function for on-demand classes.

The university is scaling up its institutional response to protect the KAIST community against the outbreak of the disease following the cancellation and postponing of major academic events including the commencement and matriculation ceremonies scheduled in February and March.

The new protective measures include all sports complexes and facilities temporarily closing from February 24. All building entrance gates are only accessible with those carrying a KAIST ID card. A total of nine fever monitors have been installed in the university headquarter building, main library, dining halls, the day care center at Daejeon campus, and at the Seoul campus.

The Emergency Response Team is posting a daily bulletin and response manual on the KAIST portal system with updates on the number of confirmed cases in Daejeon and other regions including Seoul as well as reminder notices to help contain the spread.

Provost Kwang-Hyung Lee advised KAIST community members to refrain from traveling to the gravely affected region and foreign countries in an email sent on March 11. Anyone who has a travel history in those regions should report it to the Emergency Response Team and self-quarantine for two weeks at home or in a designated dorm complex.

KAIST surveyed all community members’ travel histories last month and instructed those who had traveled to Daegu and foreign countries or had contact with a confirmed patient to go into self-isolation or work from home while conducting intensive self-monitoring. They have been asked to report their temperature to the Emergency Response Team twice a day. The response manual recommends canceling or postponing meetings and events at the campus. “If necessary, we ask that you make a conference call instead,” said the Emergency Response Team.

Meanwhile, the Academic Affairs Office decided to employ a flexible academic schedule in consideration of students’ circumstances during this extraordinary outbreak situation. “We still need to run 16 weeks of classes for the semester but we are being flexible in how the classes can be run. It will wholly depend on the professor and students’ discussions based on their situation. We won’t apply a unilateral mid-term and final exam week during this special time,” said the bulletin from the Academic Affairs Office.