Doctor Gyu-Tae Kim from General Electric (GE) received the eleventh Cho Jeong-Hoon Academic Award. The award ceremony took place in the main conference room of the administration building on campus on May 13, 2015.

Dr. Kim, a graduate of KAIST, conducts research in the field of instable swirl combustion of gas turbines and has contributed to the development of aircraft engines. He earned his name as a researcher by identifying, for the first time in the world, the correlation between the thermoacoustic instability of gas turbine engines and the complex response of swirl flames.

The award was created in commemoration of Cho Jeong-Hoon who was killed in an explosion during his research at the KAIST Rocket Laboratory on May 13, 2003. Cho’s parents donated USD 450,000 to KAIST in his memory. Since 2005, a total of four students from KAIST, Korea University, and Kongju National University High School, all of which the late Honorary Doctor Cho attended, have received the scholarship. 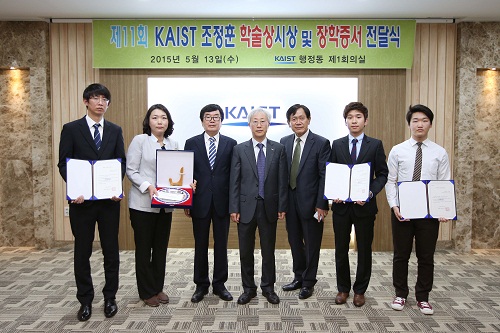