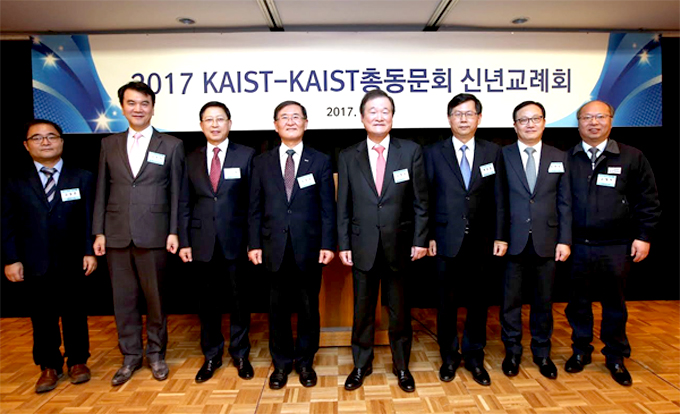 The KAIST Alumni Association presented the Alumni of the Year award to six of its most accomplished alumni at the New Year dinner held at the Lotte Hotel in Seoul on January 14.

KAIST alumni community, which numbers over 500,000, has made a significant impact around the globe in science and technology, industry, education, and the public sector. Each year, the KAIST Alumni Association honors individuals who have made a significant contribution with outstanding leadership through the Alumni of the Year awards.

Dr. Chung of SAIT (MS in physics ’79) played a leading role in developing top-notch system semiconductors and memory device technology while serving as president of the Samsung Electronic Semiconductor R&D Center. He has focused on the development of cutting-edge future technology, the Quantum Dot, by incorporating eco-friendly materials with the highest efficiency and color purity which is cadmium-free.

Working at KAERI since 2001, Dr. Baek (Ph.D. in nuclear and quantum engineering ’87) has made contributions to help Korea emerge as a nuclear technology powerhouse. He played a critical role in developing and facilitating a global nuclear safety verification facility dubbed  ‘ATLAS.’ Such nuclear technological prowess led the Korean government to advance into the foreign markets, such as exporting nuclear power plants to United Arab Emirates.

The CEO of Bioneer, Dr. Park (Ph.D. in chemistry ’87) started a bio-venture in Korea. His company has developed hundreds of reagents, diagnostic kits, and advanced equipment for gene research over two decades. Bioneer has paved the way for establishing a world-class level of infrastructure in genomic technology. By developing the innovative technology "SAMiRNA ™ (Self-Assembled-Micelle-inhibitory-RNA)" that overcomes the problems in drug development, Bioneer presented a new solution for the treatment of incurable diseases. In collaboration with global pharmaceutical companies and research groups, Dr. Park has successfully led joint development in the licensing of new therapeutic medicine candidates for various incurable diseases.

As the CEO of Vieworks, Kim (MS in physics ’95) succeeded in commercializing of digital X-ray. Especially, it is leading the design of optical and image systems that affect the quality of digital X-ray image. Kim’s company established related technology base, contributing to human health promotion and national industrial development.

President Kim of Orange Power (Ph.D. in chemical and biomolecular engineering ’93) is also the founder of the KITE Entrepreneurship Foundation. He launched Biogenix Co., Ltd. and Image and Materials Co. in 2005. In order to nurture an entrepreneurship and start-ups eco-system, he invested 10 billion KRW from the proceeds of the sale of one of his start-ups. In addition, he started Orange Power Co., Ltd. in 2012 to solve the secondary battery heat problem and established a global partnership with Hydro Quebec in Canada, Nexion in UK, Volkswagen of Germany, and Tesla of the US.