Methane, a primary component of natural gas, has emerged recently as an important energy source, largely owing to its abundance and relatively clean nature compared with other fossil fuels. In order to use natural gas as a fuel, however, it must undergo a procedure called “hydrodesulfurization” or “natural gas sweetening” to reduce sulfur-dioxide emissions from combustion of fossil fuels. This process leads to excessive and involuntary production of elemental sulfur. Although sulfur is one of the world’s most versatile and common elements, it has relatively few large-scale applications, mostly for gunpowder and sulfuric acid production.

Thus, the development of synthetic and processing methods to convert sulfur into useful chemicals remains a challenge. A research team led by Professor Ali Coskun from the Graduate School of EEWS (Energy, Environment, Water and Sustainability) at Korea Advanced Institute of Science and Technology (KAIST) has recently introduced a new approach to resolving this problem by employing elemental sulfur directly in the synthesis of microporous polymers for the process of natural-gas sweetening.

Natural gas, containing varying amounts of carbon dioxide (CO2) and hydrogen sulfide (H2S), is generally treated with amine solutions, followed by the regeneration of these solutions at increased temperatures to release captured CO2 and H2S. A two-step separation is involved in removing these gases. The amine solutions first remove H2S, and then CO2 is separated from methane (CH4) with either amine solutions or porous sorbents such as microporous polymers.

Using elemental sulfur and organic linkers, the research team developed a solvent and catalyst-free strategy for the synthesis of ultramicroporous benzothiazole polymers (BTAPs) in quantitative yields. BTAPs were found to be highly porous and showed exceptional physiochemical stability. In-situ chemical impregnation of sulfur within the micropores increased CO2 affinity of the sorbent, while limiting diffusion of CH4. BTAPs, as low-cost, scalable solid-sorbents, showed outstanding CO2 separation ability for flue gas, as well as for natural and landfill gas conditions.

The team noted that: “Each year, millions of tons of elemental sulfur are generated as a by-product of petroleum refining and natural-gas processing, but industries and businesses lacked good ideas for using it. Our research provides a solution: the direct utilization of elemental sulfur into the synthesis of ultramicroporous polymers that can be recycled back into an efficient and sustainable process for CO2 separation. Our novel polymeric materials offer new possibilities for the application of a little-used natural resource, sulfur, to provide a sustainable solution to challenging environmental issues.”

This work was published online in Chem on September 8, 2016 and also highlighted in C&EN (Chemical & Engineering News) by the American Chemical Society (ACS) on September 19, 2016. The research paper was entitled “Direct Utilization of Elemental Sulfur in the Synthesis of Microporous Polymers for Natural Gas Sweetening.” (DOI: 10.1016/j.chempr.2016.08.003)

Figure 1. A Schematic Image of Direct Utilization of Elemental Sulfur

This image shows direct utilization of elemental sulfur in the synthesis of microporous polymers and its gas separation performance. 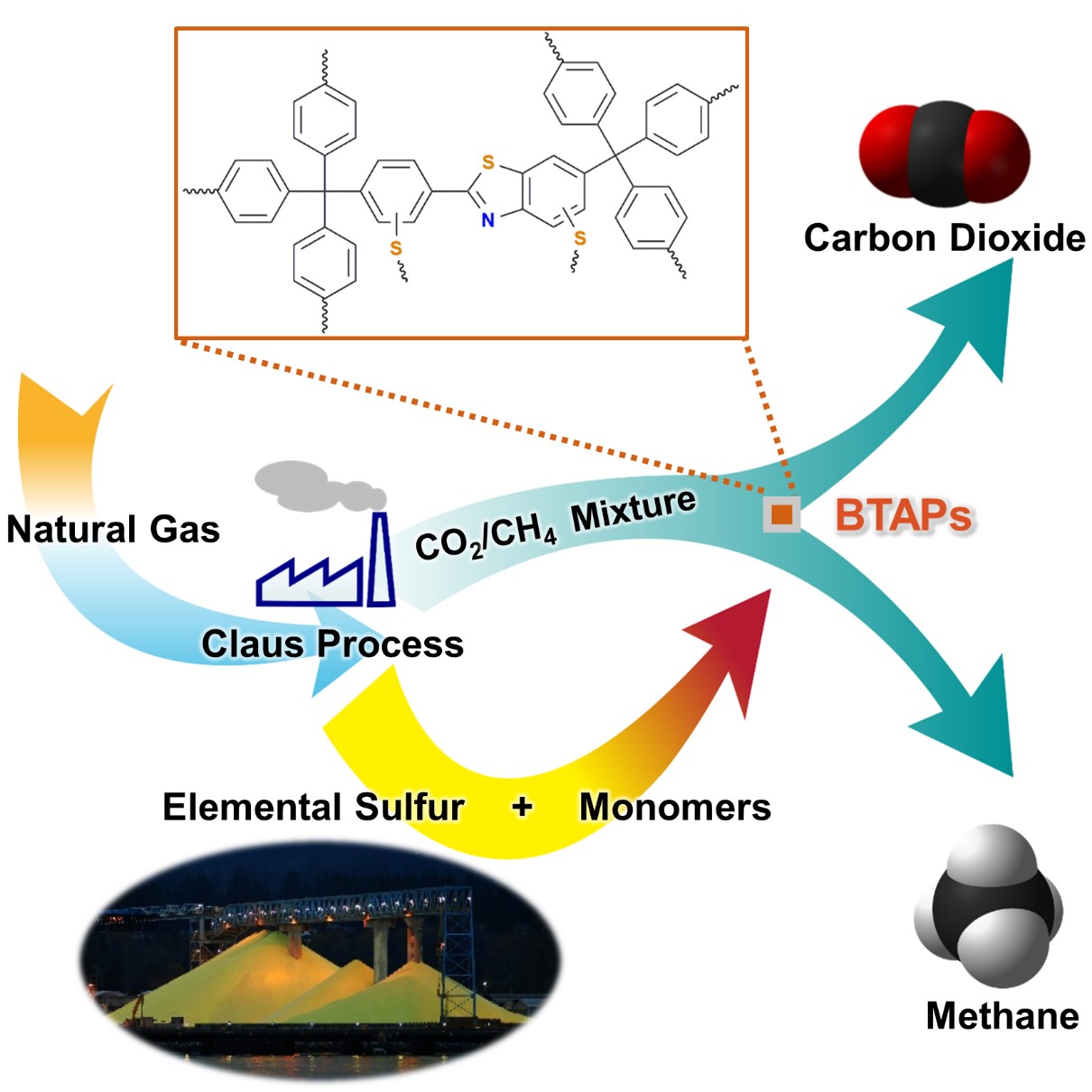