KAIST researchers will lead an IdeasLab on biotechnology for an aging society while HUBO, the winner of the 2015 DARPA Robotics Challenge, will interact with the forum participants, offering an experience of state-of-the-art robotics technology.

Representatives from KAIST will attend the 2016 Annual Meeting of the World Economic Forum to run an IdeasLab and showcase its humanoid robot.

With over 2,500 leaders from business, government, international organizations, civil society, academia, media, and the arts expected to participate, the 2016 Annual Meeting will take place on January 20-23, 2016 in Davos-Klosters, Switzerland. Under the theme of “Mastering the Fourth Industrial Revolution,” global leaders will discuss the period of digital transformation that will have profound effects on economies, societies, and human behavior.

President Sung-Mo Kang will join the Global University Leaders Forum (GULF), a high-level academic meeting to foster collaboration among experts on issues of global concern for the future of higher education and the role of science in society. He will discuss how the emerging revolution in technology will affect the way universities operate and serve society. KAIST is the only Korean university participating in GULF, which is composed of prestigious universities invited from around the world.

Four KAIST professors, including Distinguished Professor Sang Yup Lee of the Chemical and Biomolecular Engineering Department, will lead an IdeasLab on “Biotechnology for an Aging Society.”

Professor Lee said, “In recent decades, much attention has been paid to the potential effect of the growth of an aging population and problems posed by it. At our IdeasLab, we will introduce some of our research breakthroughs in biotechnology to address the challenges of an aging society.”

In particular, he will present his latest research in systems biotechnology and metabolic engineering. His research has explained the mechanisms of how traditional Oriental medicine works in our bodies by identifying structural similarities between effective compounds in traditional medicine and human metabolites, and has proposed more effective treatments by employing such compounds.

KAIST will also display its networked mobile medical service system, “Dr. M.” Built upon a ubiquitous and mobile Internet, such as the Internet of Things, wearable electronics, and smart homes and vehicles, Dr. M will provide patients with a more affordable and accessible healthcare service.

In addition, Professor Jun-Ho Oh of the Mechanical Engineering Department will showcase his humanoid robot, “HUBO,” during the Annual Meeting. His research team won the International Humanoid Robotics Challenge hosted by the United States Defense Advanced Research Projects Agency (DARPA), which was held in Pomona, California, on June 5-6, 2015. With 24 international teams participating in the finals, HUBO completed all eight tasks in 44 minutes and 28 seconds, 6 minutes earlier than the runner-up, and almost 11 minutes earlier than the third-place team. Team KAIST walked away with the grand prize of USD 2 million.

Professor Oh said, “Robotics technology will grow exponentially in this century, becoming a real driving force to expedite the Fourth Industrial Revolution. I hope HUBO will offer an opportunity to learn about the current advances in robotics technology.”

President Kang pointed out, “KAIST has participated in the Annual Meeting of the World Economic Forum since 2011 and has engaged with a broad spectrum of global leaders through numerous presentations and demonstrations of our excellence in education and research. Next year, we will choreograph our first robotics exhibition on HUBO and present high-tech research results in biotechnology, which, I believe, epitomizes how science and technology breakthroughs in the Fourth Industrial Revolution will shape our future in an unprecedented way.” 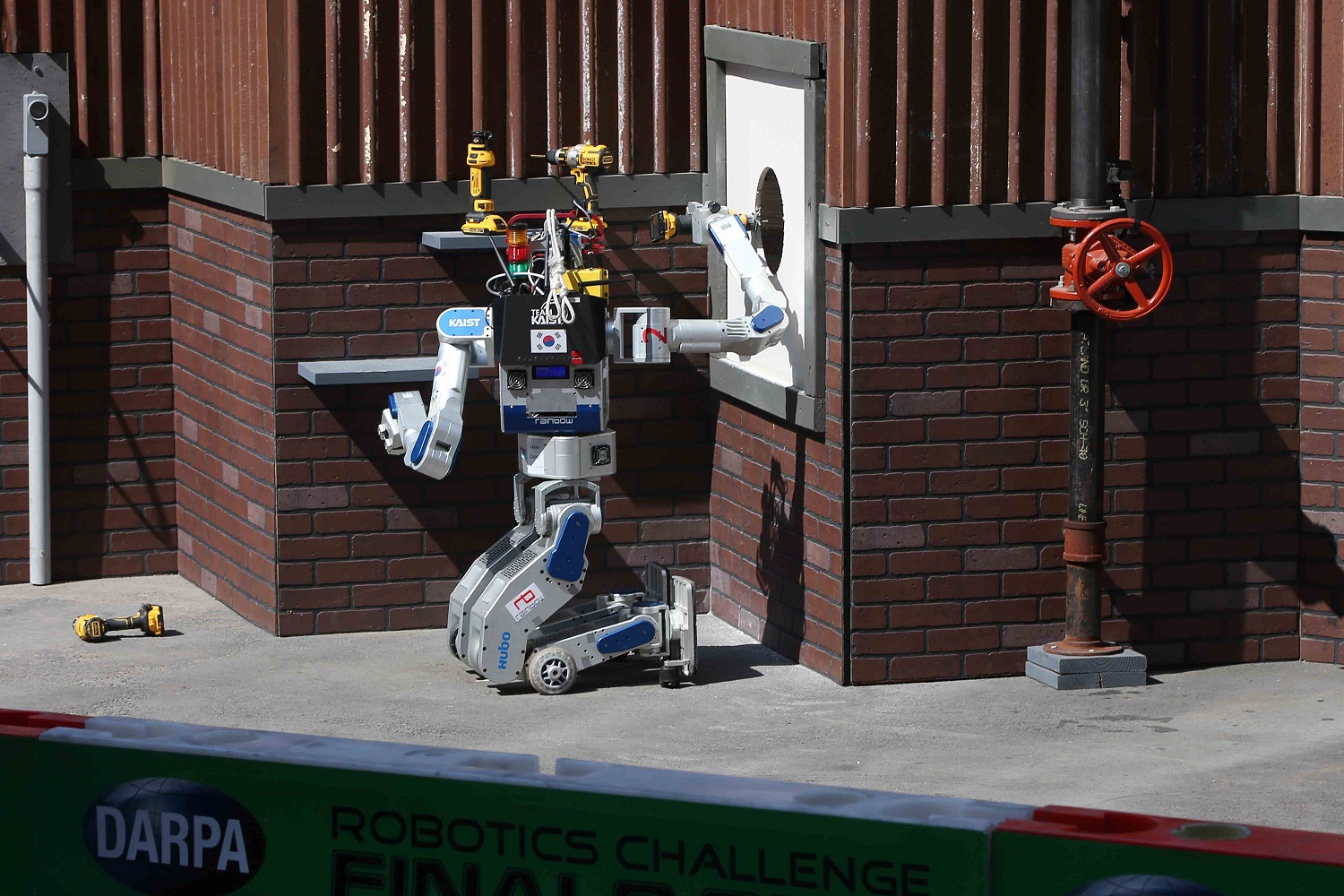