DRC-HUBO finished all eight assignments in less than 45 minutes, taking first place among 24 international teams and claiming the USD 2 million prize offered by a US defense research agency.

The Robotics Challenge Finals 2015 hosted by the US Defense Advanced Research Projects Agency (DARPA) took place on June 5-6, 2015 at the Fairplex in Pomona, California.

Team KAIST of the Republic of Korea led by Professor Jun-Ho Oh of the Mechanical Engineering Department at the Korea Advanced Institute of Science and Technology (KAIST), Professor In-So Kweon of the Electrical Engineering Department, and researchers from Rainbow Co., the university’s spin-off company that builds the robots, won the DARPA Finals. The team received USD 2 million as a prize.

The DARPA’s Robotics Challenge (DRC) promotes a competition of robot systems and software teams which seek to develop robots capable of assisting humans in responding to natural and man-made disasters such as the Fukushima Daiichi nuclear incident in 2011. The DRC consists of three competitions: a software-based Virtual Robotics Challenge which took place in June 2013; the Robotics Challenge Trials in Homestead, Florida, in December 2013; and the Finals in June 2015.

A total of 24 teams from universities and private and public research institutes from Korea, the US, Hong Kong, Germany, Japan, and Italy participated in the Finals. The participating teams had to finish eight assignments in 60 minutes, during which their robots were untethered and operated wirelessly without communication from their engineers.

Each team was assigned a series of tasks: they included driving a vehicle, getting out of a vehicle, opening a door, turning a valve, drilling a hole in a wall, a surprise task such as pushing a button or turning on a switch, walking over rubble or debris, and climbing stairs. Robots scored a point each time they completed their missions. To win, a team had to complete all the tasks successfully in the shortest amount of time possible.

Team KAIST completed the entire course in 44 minutes and 28 seconds, followed by the Institute of Human and Machine Cognition (IHMC) Robotics in Pensacola, Florida in 50:26, and Team TARTAN Rescue of the National Robotics Engineering Center at Carnegie Mellon University in 55:15.

For details, see an article below from the New York Times:

DRC-HUBO sticks a plug into an outlet for the surprise task at the 2015 DARPA Robotics Challenge on June 5-6, 2015, in Pomona, California. 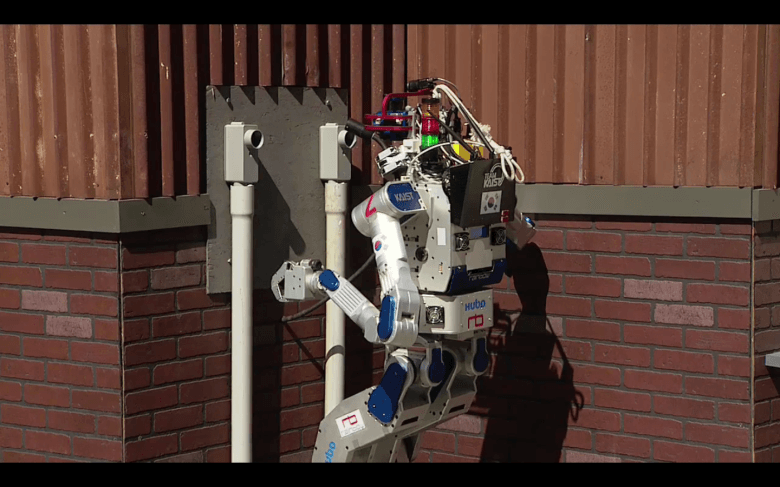 DRC-HUBO turns a valve in a clockwise direction. 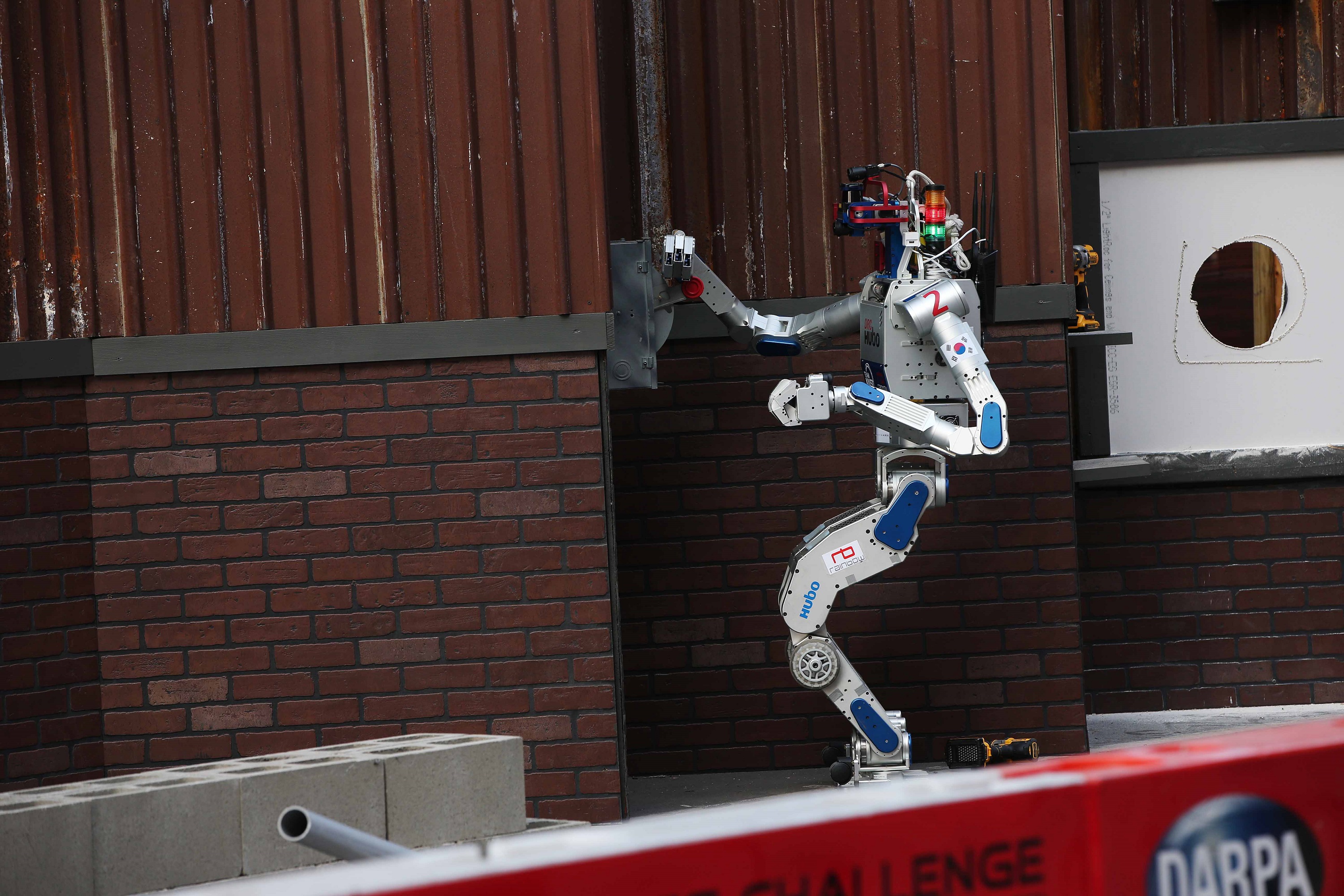 DRC-HUBO drills to cut a circle into the wall. 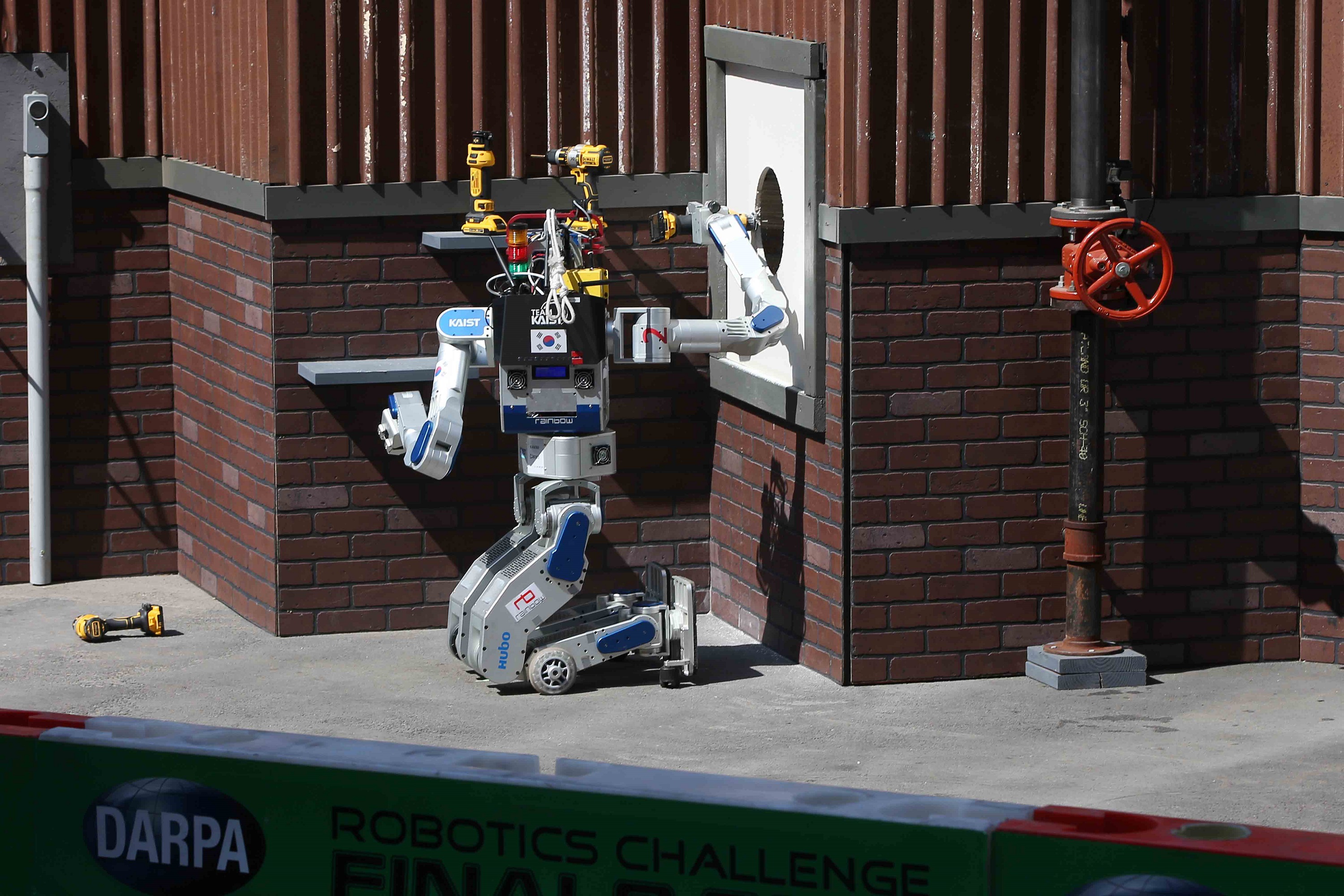 Members of Team KAIST pose together after the award ceremony on June 6, 2015. 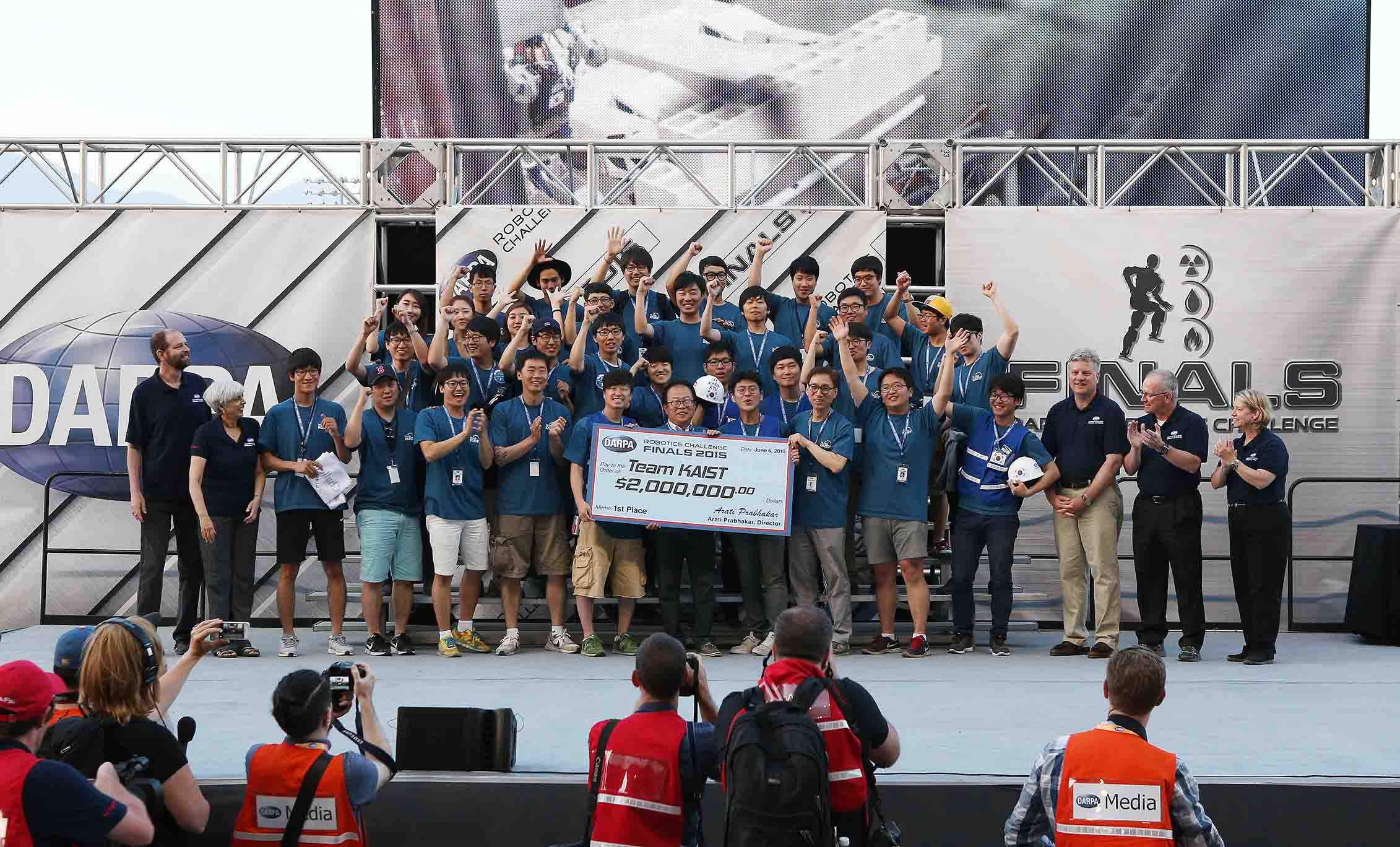