A Korean research team at KAIST suggests that a system approach using metabolite structural similarity helps to elucidate the mechanisms of action of traditional oriental medicine.

Traditional oriental medicine (TOM) has been practiced in Asian countries for centuries, and is gaining increasing popularity around the world. Despite its efficacy in various symptoms, TOM has been practiced without precise knowledge of its mechanisms of action. Use of TOM largely comes from empirical knowledge practiced over a long period of time. The fact that some of the compounds found in TOM have led to successful modern drugs such as artemisinin for malaria and taxol (Paclitaxel) for cancer has spurred modernization of TOM.

Structural similarity analysis has helped to identify mechanisms of action of TOM. This is described in a recent study entitled “A systems approach to traditional oriental medicine,” published online in Nature Biotechnology on March 6, 2015. In this study, the research team conducted structural comparisons of all the structurally known compounds in TOM and human metabolites on a large-scale. As a control, structures of all available approved drugs were also compared against human metabolites. This structural analysis provides two important results. First, the identification of metabolites structurally similar to TOM compounds helped to narrow down the candidate target pathways and reactions for the effects from TOM compounds. Second, it suggested that a greater fraction of all the structurally known TOM compounds appeared to be more similar to human metabolites than the approved drugs. This second finding indicates that TOM has a great potential to interact with diverse metabolic pathways with strong efficacy. This finding, in fact, shows that TOM compounds might be advantageous for the multitargeting required to cure complex diseases. “Once we have narrowed down candidate target pathways and reactions using this structural similarity approach, additional in silico tools will be necessary to characterize the mechanisms of action of many TOM compounds at a molecular level,” said Hyun Uk Kim, a research professor at KAIST.

TOM’s multicomponent, multitarget approach wherein multiple components show synergistic effects to treat symptoms is highly distinctive. The researchers investigated previously observed effects recorded since 2000 of a set of TOM compounds with known mechanisms of action. TOM compounds’ synergistic combinations largely consist of a major compound providing the intended efficacy to the target site and supporting compounds which maximize the efficacy of the major compound. In fact, such combination designs appear to mirror the Kun-Shin-Choa-Sa design principle of TOM.

That principle, Kun-Shin-Choa-Sa (君臣佐使 or Jun-Chen-Zuo-Shi in Chinese) literally means “king-minister-assistant-ambassador.” In ancient East Asian medicine, treating human diseases and taking good care of the human body are analogous to the politics of governing a nation. Just as good governance requires that a king be supported by ministers, assistants and/or ambassadors, treating diseases or good care of the body required the combined use of herbal medicines designed based on the concept of Kun-Shin-Choa-Sa. Here, the Kun (king or the major component) indicates the major medicine (or herb) conveying the major drug efficacy, and is supported by three different types of medicines: the Shin (minister or the complementary component) for enhancing and/or complementing the efficacy of the Kun, Choa (assistant or the neutralizing component) for reducing any side effects caused by the Kun and reducing the minor symptoms accompanying major symptom, and Sa (ambassador or the delivery/retaining component) which facilitated the delivery of the Kun to the target site, and retaining the Kun for prolonged availability in the cells.

Professor Sang Yup Lee remarks, “This study lays a foundation for the integration of traditional oriental medicine with modern drug discovery and development. The systems approach taken in this analysis will be used to elucidate mechanisms of action of unknown TOM compounds which will then be subjected to rigorous validation through clinical and in silico experiments.”

The picture below presents the structural similarity analysis of comparing compounds in traditional oriental medicine and those in all available approved drugs against the structures of human metabolites. 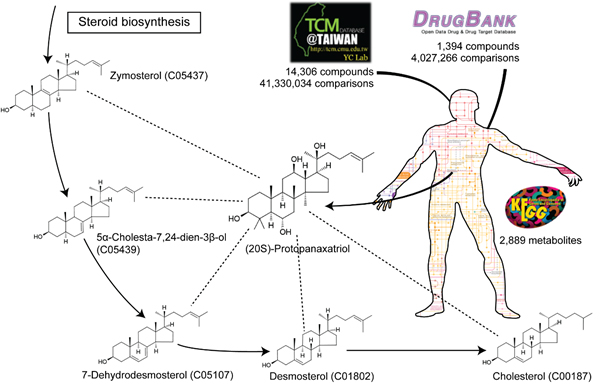