The 2014 SoC Robot Competition Took Place​
View : 5899 Date : 2014-10-27 Writer : ed_news
Professor Hoi-Jun Yoo of the Department of Electrical Engineering at KAIST and his research team hosted a competition for miniature robots with artificial intelligence at KINTEX in Ilsan, Korea, on October 23-26, 2014.
The competition, called the 2014 SoC Robot War, showed the latest developments of semiconductor and robot technology through the robots’ presentations of the Korean martial art, Taekwondo, and hurdles race. SoC is a system on ship, an integrated circuit that holds all components of a computer or other electronic systems in a single chip. SoC robots are equipped with an artificial intelligence system, and therefore, can recognize things on their own or respond automatically to environmental changes. SoC robots are developed with the integration of semiconductor technology and robotics engineering.
Marking the thirteenth competition this year since its inception, the Robot War featured two competitions between HURO and Taekwon Robots. Under the HURO competition, participating robots were required to run a hurdle race, pass through barricades, and cross a bridge. The winning team received an award from the president of the Republic of Korea. Robots participating in the Taekwon Robot competition performed some of the main movements of Taekwondo such as front and side kicks and fist techniques. The winning team received an award from the prime minster of the Republic of Korea.
A total of 105 teams with 530 students and researchers from different universities across the country participated in preliminaries, and 30 teams qualified for the final competition. 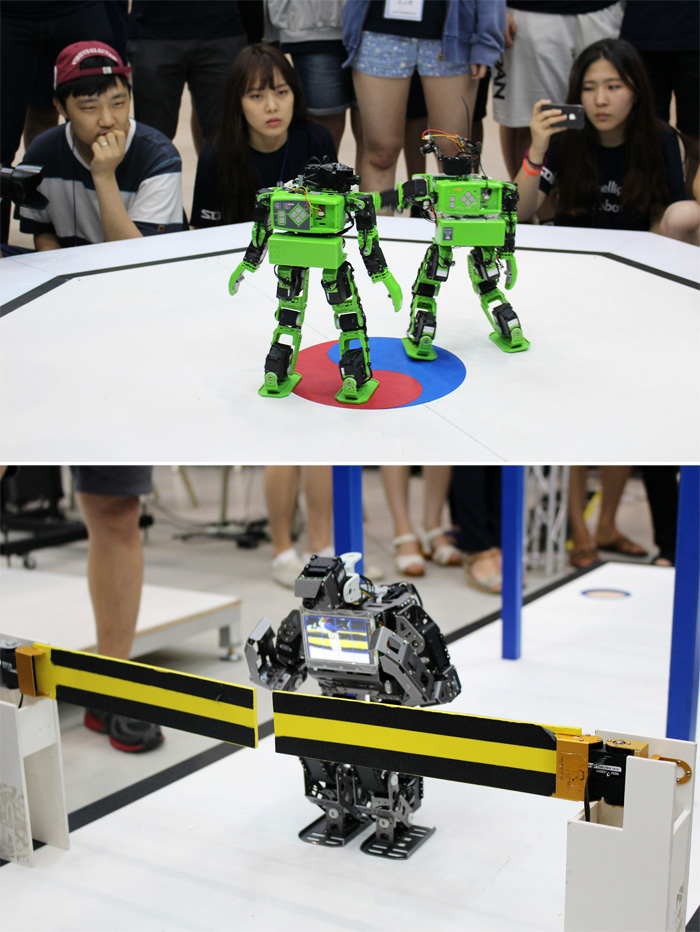