The MIT Skoltech Initiative Report identifies KAIST as one of the core group of emerging leaders for academic entrepreneurship and innovation​
View : 6441 Date : 2014-08-20 Writer : ed_news

The Massachusetts Institute of Technology (MIT) Skoltech Initiative was established in 2011 to support MIT’s multi-year collaboration in building the Skolkovo Institute of Science and Technology (Skoltech), a private graduate research university in Skolkovo, Russia.

Recently, the office of the MIT Skoltech Initiative has published a benchmark report conducted from 2012 to 2014 by Dr. Ruth Graham, an internationally recognized leading consultant for engineering education and research as well as academic technology-driven entrepreneurship, under the guidance of MIT professors and the Center for Entrepreneurship and Innovation at the MIT Skoltech Initiative.

The report identified more than 200 institutions as the world’s most highly-regarded entrepreneurial universities and characterized the approach taken by them to build university-based ecosystems for entrepreneurship and innovation (E&I).

Among the top-ranked institutions, the report mentioned an emerging group of leaders (EGLs) that are “located within more challenging environments but establishing strong entrepreneurship and innovation profiles and reputations.” The report named, in particular, five universities, KAIST (Korea), Technion (Israel), Aalto University (Finland), the University of Michigan (US), and the University of Auckland (NZ), as the core group of the EGLs.

This benchmarking study was written to highlight key strategies and features associated with well-regarded university E&I transformations within more challenging environments and to address barriers and limits faced by the EGLs, thereby providing a good model to other universities wishing to make similar changes.

Through an in-depth case study of a small group of emerging universities, the report concluded that three major components play a critical role in the development of institutional E&I capacity and the growth of ecosystems for E&I:

Component 2: Strength in industry-funded research and licensing of university-owned technology; and

For more details, please visit the link below: 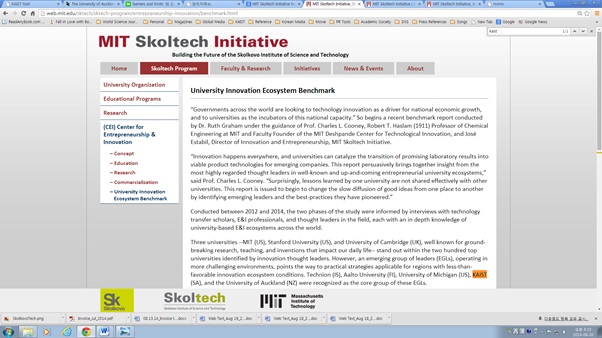