The research will be a great help to the development of C hepatitis vaccine.

Roughly 1-2% of the population in Korea is known to be infected with Hepatitis C. Most Hepatitis C Virus (HCV) infections progress to a chronic disease and can cause liver cirrhosis or liver cancer, which may lead to death.

Unlike Hepatitis type A or B, there is no vaccine for Hepatitis C Virus and therefore avoiding exposure to the virus is the best known method of prevention. However, a team of researchers at KAIST has produced research results, which may contribute significantly to the vaccine development.

KAIST Graduate School of Medical Sciences & Engineering’ Professor Ui-Cheol Shin and his team have successfully identified why Hepatitis C Virus does not cause an immune response within the human body. The research results were published in the May edition of The Journal of Gastroenterology, a world-renowned journal in the field of gastroenterology.

The immune response occurs to eliminate the virus that has invaded our body. During this process, a major histocompatibility complex [MHC] class I plays a key role in inducing T cell response, which is needed for the elimination of virus-infected cells.

When a cell is infected by a virus, a substance called interferon causes the increased expression of major histocompatibility complex class I. T cell recognizes the increased MHC class I and therefore finds the virus-infected cells.

However, the effect that Hepatitis C Virus has on major histocompatibility complex class I has not been clearly identified until now.

The research team has revealed, using a cell culture for infection systems, that the Hepatitis C Virus suppresses the expression of major histocompatibility complex class I. Also, the mechanism to prove that HCV activates a protein called PKR within the cell to inhibit MHC class I protein expression was identified at a molecular level.

In this study, researchers established the hypothesis that regulating PKR protein in the cell can enhance the T cell immune response, which was then proved through experiments.

Professor Ui-Cheol Shin said, “There are a lot of new drugs to treat Hepatitis C Virus, while its vaccine has not been developed yet. Revealing the HCV immune evasion mechanism will help stimulate momentum for the HCV vaccine development.”

The first author of the journal, Dr. Won-Seok Kang is a graduate from Yonsei College of Medicine. After earning his medical degree, he has continued his training as a ‘doctor-scientist’ at KAIST Graduate School of Medical Sciences & Engineering to study Hepatitis C Virus immune evasion mechanism in this research. 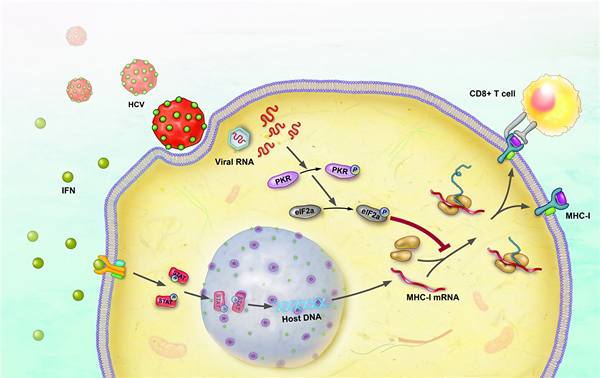