Professor Wangyeol Oh of KAIST’s Mechanical Engineering Department has succeeded in developing an optical imaging endoscope system that employs an imaging velocity, which is up to 3.5 times faster than the previous systems. Furthermore, he has utilized this endoscope to acquire the world’s first high-resolution 3D images of the insides of in vivo blood vessel.

Professor Oh’s work is Korea’s first development of blood vessel endoscope system, possessing an imaging speed, resolution, imaging quality, and image-capture area. The system can also simultaneously perform a functional imaging, such as polarized imaging, which is advantageous for identifying the vulnerability of the blood vessel walls.

However, the previous system was not fast enough to take images inside of the vessels, and therefore it was often impossible to accurately identify and analyze the vessel condition. To achieve an in vivo blood vessel optical imaging in clinical trials, the endoscope needed to be inserted, after which a clear liquid flows instantly, and pictures can be taken in only a few seconds.

The KAIST research team proposed a solution for such problem by developing a high-speed, high-resolution optical tomographic imaging system, a flexible endoscope with a diameter of 0.8 mm, as well as a device that can scan the imaging light within the blood vessels at high speed. Then, these devices were combined to visualize the internal structure of the vessel wall.

Using the developed system, the researchers were able to obtain high-resolution images of about 7 cm blood vessels of a rabbit’s aorta, which is similar size to human’s coronary arteries. The tomography scan took only 5.8 seconds, at a speed of 350 scans per second in all three directions with a resolution of 10~35㎛.

If the images are taken every 200 ㎛, like the currently available commercial vascular imaging endoscopes, a 7cm length vessel can be imaged in only one second.

“Collaborating closely with hospitals, we are preparing to produce the imaging of an animal’s coronary arteries, which is similar in size to the human heart,” commented Professor Oh on the future clinical application and commercialization of the endoscope system. He added, “After such procedures, the technique can be applied in clinical patients within a few years.”

Professor Oh’s research was supported by the National Research Foundation of Korea and the Global Frontier Project by the Korean government. The research results were published in the 2014 January’s edition of Biomedical Optics Express.

Figure 3: High-resolution images of the inside of in vivo animal blood vessels (in the direction of vascular circumference and length)

Figure 4: High-resolution images of the inside of in vivo animal blood vessels (in the direction of the vein depth) 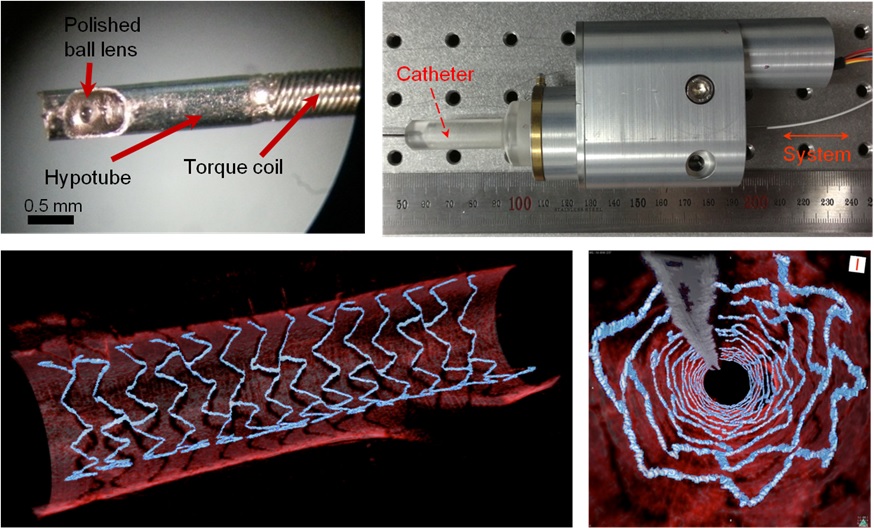