President Steve Kang had a press conference on February 25, 2014 at the Faculty Club on campus, commemorating the first year of his presidency. About 30 different media representatives nationwide attended the meeting.

At his first press conference on the anniversary of his tenure, President Kang described what he has achieved in the past year, which were: 1) rebuilding the campus culture to start a campaign for mutual respect, trust, and open communication by holding meetings with the members of the KAIST community more than 60 times, 2) establishing core values, creativity and challenge, to enhance the fabric of the community, 3) restructuring of the university administration, and 4) the announcement of the mid- and long-term development plan.

He also mentioned that “2014 will be another exciting year for KAIST to make more progress” and laid out a few major projects to be implemented this year: launching of the “Committee for Engineering Education Innovation,” “Startup KAIST” (an entrepreneurship program), “Greater Collaboration in Technology Translation and Management with Seoul National University,” and “KAIST End Run” (a global business incubation program).

As a result, engineering Professors have been evaluated as being too focused on theoretical SCI dissertation research rather than practical research that could yield economic benefits through commercialization of developed technology. In addition, some have criticized that engineering universities have not educated creative researchers demanded by the industry.

KAIST has begun responding to these criticisms and has made a few suggestions to strengthen engineering education, promote entrepreneurship in engineers, and globalize Korean venture companies.

As part of such efforts, KAIST established the KAIST Education and Research Innovation Committee, composed of various individuals from the industry, research institutes, alumni, faculty members, and others, to discuss ways to reinforce engineering education.

A course to encourage entrepreneurship will be implemented.

Startup KAIST will develop and commercialize innovative ideas from members of KAIST, and the End Run project will enable students and faculty to establish a global, venture company. KAIST hopes that a new entrepreneurial culture will be created on campus, thereby the research success of KAIST members will lead to commercialization and startups.

KAIST plans on releasing free internet lectures as part of its knowledge contribution and sponsoring programs which will level the playing field in eduation.

KAIST will establish the KAIST Open Online Course (KOOC). An entrepreneurship curriculum will be developed for KOOC. KAIST will start trials for KOOC from 2015, gradually expanding to include more courses. 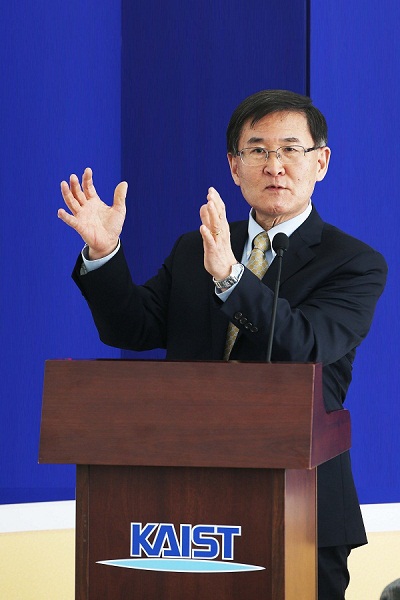