Materials Developed for Sodium Rechargeable Battery by EEWS​
View : 7040 Date : 2014-01-13 Writer : ed_news
The research group of Professor William Goddard III, You-Sung Jung, and Jang-Wook Choi from the Graduate School of Energy, Environment, Water, and Sustainability (EEWS) at KAIST has developed a new sodium-ion rechargeable battery which operates at a high voltage, can be charged, and stably discharges over 10,000 cycles. The research results were published in the online version of the Proceedings of the National Academy of Sciences of the United States of America (PNAS) on December 30, 2013.

The group said follow-up research will be continued to develop advanced technology on sodium rechargeable batteries as it is still currently in the beginning stages.

The research team: From left to right is Professors William Goddard, You-Sung Jung, and Jang-Wook Choi 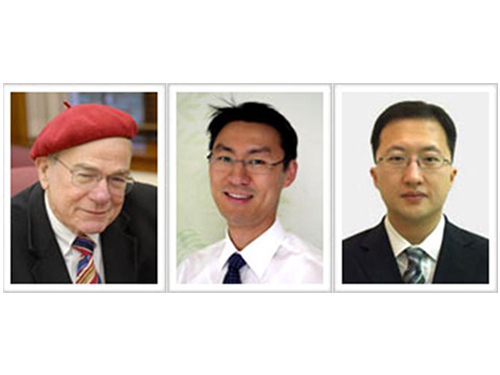