The ceremony for the 3rd Intellectual Property Award was held at the KAIST campus in Seoul on November 2nd. The award is given annually to Korean practitioners in intellectual property.

This year’s recipients were Sang-Hui Lee, the president of the World Intellectual Property Association of Korean Practitioners (WIPA) and the SK Hynix Patent Group which successfully defended a long-lasting claim against a patent specialist corporation.

The Intellectual Property Award (IP Award) is presented in recognition to Korean individuals or groups that contributed to national competitiveness through creation, application, or proceedings of intellectual property, as well as to building the foundation for the protection of patents, intellectual properties, and trademarks.

President Lee successfully hosted the Global Intellectual Property Summit in Seoul, which was held in October 2012. He was a crucial force behind the foundation of WIPA in May of this year and was also elected as the first president for the organization. Recently, President Lee has been at the forefront of job creation through the efficient use of intellectual property and the creative discovery of venture endeavors.

President Lee said, “The unique characteristic of a knowledge-based society lies in the collaboration network of people and knowledge property, startups based on intellectual property, and decentralized development.”

He added, “Just as Finland adopted a policy to build venture companies in utilization of intellectual properties and encouraged the decentralized growth throughout the nation after the collapse of Nokia, Korea must adapt to meet the changing requirements of the knowledge-intensive era.”

The SK Hynix Patent Group, another recipient for the Intellectual Property Award, won the lawsuit, dragged on for 13 years, against the Rambus, an American patent specialized corporation. The group initially lost the first trial in the federal court of California, but through relentless research and efforts, they won the case in the appeals court. 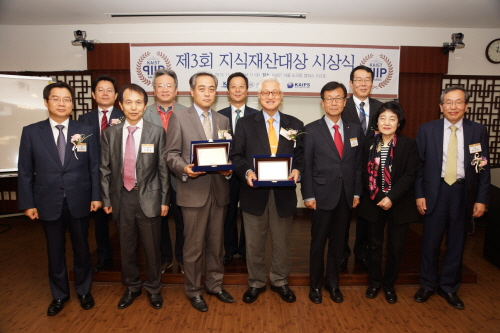