A major scientific breakthrough in the development of renewable energy sources and other important chemicals; The research team succeeded in producing 580 mg of gasoline per liter of cultured broth by converting in vivo generated fatty acids

For many decades, we have been relying on fossil resources to produce liquid fuels such as gasoline, diesel, and many industrial and consumer chemicals for daily use. However, increasing strains on natural resources as well as environmental issues including global warming have triggered a strong interest in developing sustainable ways to obtain fuels and chemicals.

Gasoline, the petroleum-derived product that is most widely used as a fuel for transportation, is a mixture of hydrocarbons, additives, and blending agents. The hydrocarbons, called alkanes, consist only of carbon and hydrogen atoms. Gasoline has a combination of straight-chain and branched-chain alkanes (hydrocarbons) consisted of 4-12 carbon atoms linked by direct carbon-carbon bonds.

Previously, through metabolic engineering of Escherichia coli (E. coli), there have been a few research results on the production of long-chain alkanes, which consist of 13-17 carbon atoms, suitable for replacing diesel. However, there has been no report on the microbial production of short-chain alkanes, a possible substitute for gasoline.

In the paper (entitled "Microbial Production of Short-chain Alkanes") published online in Nature on September 29, a Korean research team led by Distinguished Professor Sang Yup Lee of the Department of Chemical and Biomolecular Engineering at the Korea Advanced Institute of Science and Technology (KAIST) reported, for the first time, the development of a novel strategy for microbial gasoline production through metabolic engineering of E. coli.

The research team engineered the fatty acid metabolism to provide the fatty acid derivatives that are shorter than normal intracellular fatty acid metabolites, and introduced a novel synthetic pathway for the biosynthesis of short-chain alkanes. This allowed the development of platform E. coli strain capable of producing gasoline for the first time. Furthermore, this platform strain, if desired, can be modified to produce other products such as short-chain fatty esters and short-chain fatty alcohols.

In this paper, the Korean researchers described detailed strategies for 1) screening of enzymes associated with the production of fatty acids, 2) engineering of enzymes and fatty acid biosynthetic pathways to concentrate carbon flux towards the short-chain fatty acid production, and 3) converting short-chain fatty acids to their corresponding alkanes (gasoline) by introducing a novel synthetic pathway and optimization of culture conditions. Furthermore, the research team showed the possibility of producing fatty esters and alcohols by introducing responsible enzymes into the same platform strain.

Professor Sang Yup Lee said, "It is only the beginning of the work towards sustainable production of gasoline. The titer is rather low due to the low metabolic flux towards the formation of short-chain fatty acids and their derivatives. We are currently working on increasing the titer, yield and productivity of bio-gasoline. Nonetheless, we are pleased to report, for the first time, the production of gasoline through the metabolic engineering of E. coli, which we hope will serve as a basis for the metabolic engineering of microorganisms to produce fuels and chemicals from renewable resources."

This research was supported by the Advanced Biomass Research and Development Center of Korea (ABC-2010-0029799) through the Global Frontier Research Program of the Ministry of Science, ICT and Future Planning (MSIP) through the National Research Foundation (NRF), Republic of Korea. Systems metabolic engineering work was supported by the Technology Development Program to Solve Climate Changes on Systems Metabolic Engineering for Biorefineries (NRF-2012-C1AAA001-2012M1A2A2026556) by MSIP through NRF.

This diagram shows the metabolic engineering of Escherichia coli for the production of short-chain alkanes (gasoline) from renewable biomass. 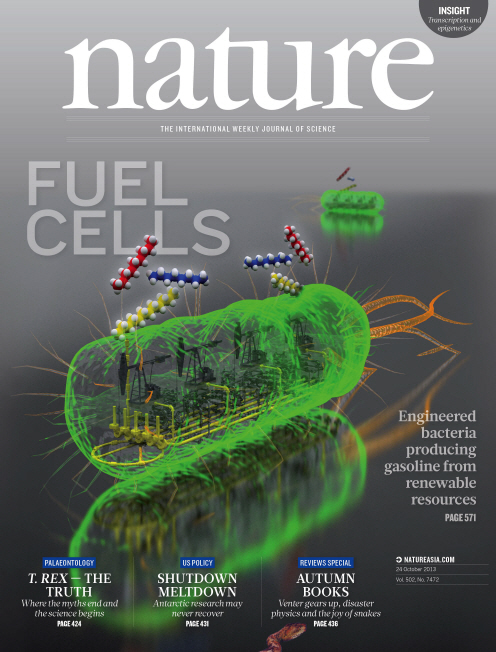