KAIST held a graduation ceremony for the year 2013 at Ryu Keun-Chul Sports Complex on February 22nd.
A total of 2,475 academic degrees were awarded this day, including 482 doctoral degrees, 1,153 master’s degrees, 838 bachelor’s degrees, and two honorary doctorates to Dr. Han Seung-Soo, a former prime minister of South Korea, and Lee Soo-young, the chairwoman of Kwang Won Industrial Co. Ltd. This commencement made KAIST to have turned out overall 46,117 talented graduates – 9,383 doctorates, 23,941 master’s degrees, and 12,793 bachelor’s degrees – to the fields of science and technology since its establishment in 1971.
The Minister of Education and Science Technology Award, which is for the student receiving bachelor’s degree with the highest academic performance, was given to Seung-Uk Jang from the Department of Mathematical Sciences. In addition, the Chairman of the KAIST Board of Trustees Award was given to Chi-Heon Kwon from the Department of Chemistry, KAIST Presidential Award to Yong-Jin Park from the Department of Chemical and Biomolecular Engineering, President of Alumni Association Award to Bong-Soo Choi from the Department Electrical Engineering, and School Supporting Association’s Award to Bo-Kyung Kim from the Bio and Brain Engineering Department.
“Climate changes due to humanity’s economic activities are threatening crucial resources such as water, food, and energy security,” said Former Prime Minister Han Seung-Soo, who received an honorary doctorate at the commencement ceremony. “Please try to solve the greatest issues that human society is facing,” he entreated in his congratulatory message.
“Use the excellent education that you have received at KAIST wisely with good purpose and ethics,” also congratulated President Suh Nam-Pyo. “I hope the graduating students of KAIST to become global leaders in the near future,” he said to the graduates entering the society.
“It was a great honor to contribute as the president of KAIST for almost 7 years, which has been the most challenging and worthwhile time in my life,” he delivered words of gratitude to all members of KAIST. “I appreciate everyone’s efforts for KAIST to develop so far.”
President Suh completed his duty as the fourteenth president of KAIST with the ceremony and returned to the United States on the 25th. 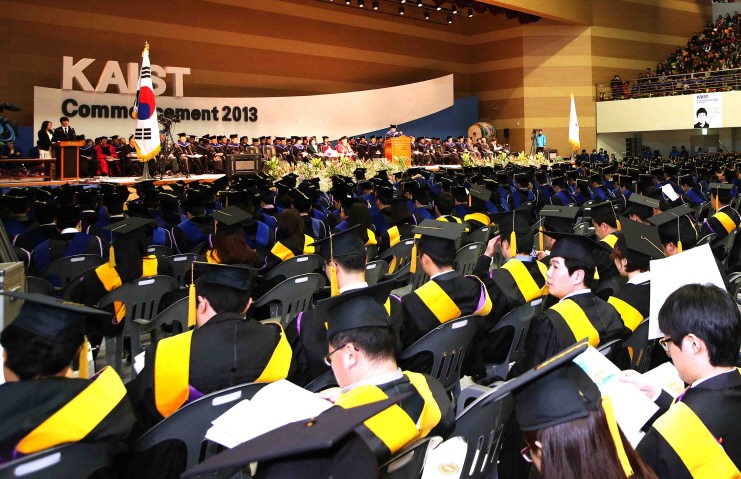