This software, named ‘NAKiD’, was first presented at the renowned Computer Graphics conference/exhibition ‘Siggraph 2012’ in August and received intense interest from the participants.
The ‘NAKiD’ technology is forecasted to replace the expensive imported equipment and technology used in 3D filming.
For multi-viewpoint no-glasses 3D stereopsis, two cameras are needed to film the image. However, ‘NAKiD’ can easily convert images from a single camera into a 3D image, greatly decreasing the problems in the film production process as well as its cost.
There are 2 methods commonly used in the production of 3D stereoscopic images; filming using two cameras and the 3D conversion using computer software.
The use of two cameras requires expensive equipment and the filmed images need further processing after production. On the other hand, 3D conversion technology does not require extra devices in the production process and can also convert the existing 2D contents into 3D, a main reason why many countries are focusing on the development of stereoscopic technology.
Stereoscopic conversion is largely divided in to 3 steps; object separation, formation of depth information and stereo rendering. Professor Noh’s teams focused on the optimization of each step to increase the efficiency of the conversion system.
Professor Noh’s research team first increased the separation accuracy to the degree of a single hair and created an algorithm that automatically fills in the background originally covered by the separated object.
The team succeeded in the automatic formation of depth information using the geographic or architectural characteristic and vanishing points. For the stereo rendering process, the team decreased the rendering time by reusing the rendered information of one side, rather than the traditional method of rendering the left and right images separately.
Professor Noh said that ‘although 3D TVs are becoming more and more commercialized, there are not enough programs that can be watched in 3D’ and that ‘stereoscopic conversion technology is receiving high praise in the field of graphics because it allows the easy production of 3D contents with small cost’. 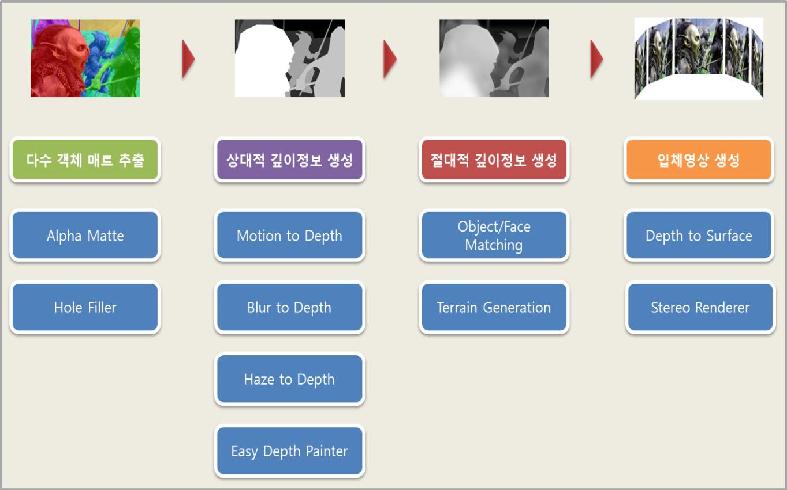