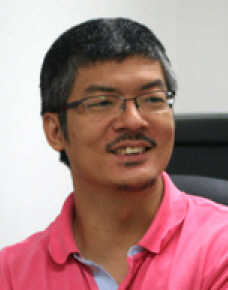 The bright colors of a rainbow or a peacock are produced by the reflection and interference of light in transparent periodic structures, producing what is called a structural color. These colors are very bright and change according to the viewing angle. On the other hand, the wings of a morpho-butterfly also have structural colors but are predominantly blue over a wide range of angles. This is because the unique structure of the morpho-butterfly’s wings contains both order and chaos.
Professor Shin Jung Hoon’s team from the Department of Physics and the Graduate School of Nanoscience and Technology at KAIST produced a display that mimics the structure of the morpho-butterfly’s wings using glass beads.
This research successfully produced a reflective display (one that reflects external light to project images), which could be used to make very bright displays with low energy consumption. This technology can also be used to make anti-counterfeit bills, as well as coating materials for mobile phones and wallets.
The structure of the morpho-butterfly’s wings seems to be in periodic order at the 1-micrometer level, but contains disorder at the 100-nanometer level. So far, no one had succeeded in reproducing a structure with both order and disorder at the nanometer level.
Professor Shin’s team randomly aligned differently sized glass beads of a few hundred nanometers to create chaos and placed a thin periodic film on top of it using the semiconductor deposition method, thereby creating the morpho-butterfly-like structure over a large area.
This new development produced better color and brightness than the morpho-butterfly wing and even exhibited less color change according to angle. The team sealed the film in thin plastic, which helped to maintain the superior properties whilst making it more firm and paper-like.
Professor Shin emphasized that the results were an exemplary success in the field of biomimetics and that structural colors could have other applications in sensors and fashion, for example.
The results were first introduced on May 3rd in Nature as one of the Research Highlights and will be published in the online version of the material science magazine, Advanced Materials.
This research was jointly conducted by Professor Shin Jung Hoon (Department of Physics / Graduate School of Nanoscience and Technology at KAIST), Professor Park NamKyoo (Department of Electrical and Computer Engineering at Seoul National University), and Samsung Advanced Institute of Technology. The funding was provided by the National Research Foundation of Korea and the Ministry of Education, Science and Technology as part of the World Class University (WCU) project.
Figure 2. The biomimetic film can express many different colors

Figure 3. The biomimetic diplay and a morpho-butterfly 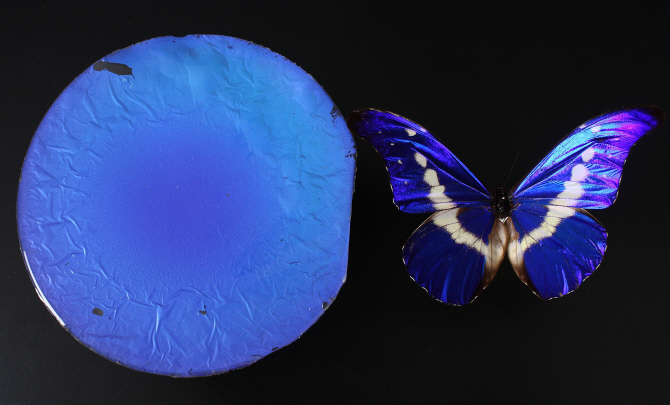