Leaders of the world"s major research universities discussed the impact of the global economic crisis on institutions of higher learning and their research activities in particular and exchanged opinions and visions on ways to increase cooperation with governments and industry at a symposium organized by KAIST Monday (Sept. 21) at the Westin Chosun Hotel in Seoul.

More than 50 participants of the 2nd International Presidential Forum on Global Research Universities represented institutions in North America, Europe, Southeast Asia, Australia, China and Japan. They were joined by 20 presidents of Korean universities and two dozens of leaders from industry and the government.

Under the main subject of "Challenges to Global Research Universities," the international symposium proceeded in four panel sessions. The subjects of each session and their keynote speakers were:

-- "Institutional Management in Times of Financial Crisis" by Kurt Kutzler, President of Berlin Institute of Technology
-- "Innovations in Education & Research" by Brian Cantor, Vice Chancellor of University of York
-- "Globalization of Institutes of Higher Learning" by Gary Schuster, Provost and Executive Vice President of Georgia Institute of Technology
-- "The Roles of Government, University and Industry in Green Technology Development" by KAIST President Nam-Pyo Suh

KAIST President Suh expressed deep gratitude to all participants for their presentations focused on how universities weathered the difficulties from the economic turmoil and how they were continuing efforts for innovation in research and education. He observed that the 2009 International Presidential Forum was again most successful and productive after the first in 2008 and offered a precious opportunity for leaders of research universities to establish effective networking among their institutions.

"The world has witnessed a global financial turmoil of unseen magnitude and many nations are still struggling under the devastating impacts. While universities were no exception in facing economic turmoil, they have realized renewed pressures and expectations from their respective communities to provide answers to the great challenges,” he said in his welcoming remarks.

"The conference I am sure will have a far-reaching influence on the course our research universities will take to shoulder greater responsibilities for building a better future of the mankind."

Some of the participants in the 2009 International Presidential Forum came to KAIST’s Daejeon campus to take part in the EEWS (energy, environment, water and sustainability) workshop which was held on Tuesday, Sept. 22.

The Chronicle of Higher Learning, the Washington-based newspaper specializing in university education, reported from Seoul that the Forum revealed that, while American universities struggle amid the harshest economic climate in a generation, institutions in much of the rest of the world are sheltered from the fallout by strong government backing.

“Delegates to a conference of university presidents (in Seoul on Monday, Sept. 22) heard that colleges in Asia and Europe are pushing ahead with expansion plans – even as their U.S. counterparts cut back.

“The 2009 International Presidential Forum… was marked by a sharp divide in the tone set by European, Asian, and U.S. college leaders. The Americans often sounded a deeply gloomy note,” The Chronicle reported. “Never before has the impact been this bad,” the paper quoted Vishwanath Prasad, vice president for research and economic development at the University of North Texas, as saying.

On the other hand, Yves Poilane, vice president of the Paris Institute of Technology, said, according to The Chronicle, “The largely state financing of most European universities has so far acted as a shelter, and higher education remains a priority for both European and French Universities.”

The Korea Herald, published in Seoul, said in its Sept. 23 editorial:

“This week in Seoul, a symposium of leaders from international and Korean research universities heard top scholars and administrators reveal how their schools have suffered through the year under reduced government subsidies and private endowments which forced them to postpone various globalization schemes and cut down on research expenditures. Applications for master"s and Ph.D. programs declined while large percentages of graduates failed to find jobs.

“With their country showing a rapid pace of recovery, universities in Korea are in a better situation than many of their overseas counterparts, especially considering the substantial government outlays for research and development in "low carbon, green growth" projects that are largely dependent on research universities. The more the government seeks their direct contributions, the harder universities should try to increase transparency and accountability in the use of taxpayer money, so as not to betray the nation"s trust in them.

“In the wake of the global economic crisis, academia, government and industry find themselves in closer ties as they share new concepts of innovation and development in a common quest for growth. The tripartite cooperation has new significance in the recovery process. To achieve any development objectives, the other two partners must prioritize the funding of universities.” 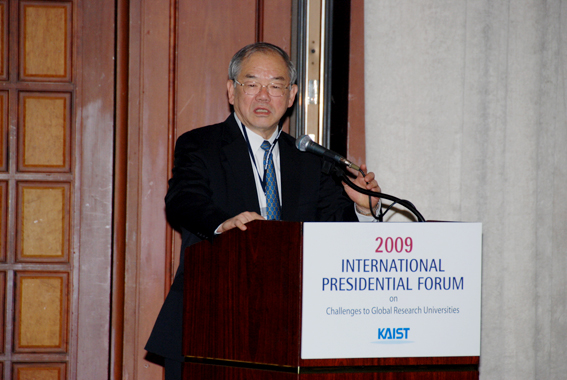