- As the marriage of AI and semiconductor being highlighted as the strategic technology of national enthusiasm, KAIST's achievements in the related fields accumulated through top-class education and research capabilities that surpass that of peer universities around the world are standing far apart from the rest of the pack.

As Artificial Intelligence Semiconductor, or a system of semiconductors designed for specifically for highly complicated computation need for AI to conduct its learning and deducing calculations, (hereafter AI semiconductors) stand out as a national strategic technology, the related achievements of KAIST, headed by President Kwang Hyung Lee, are also attracting attention. The Ministry of Science, ICT and Future Planning (MSIT) of Korea initiated a program to support the advancement of AI ​​semiconductor last year with the goal of occupying 20% ​​of the global AI semiconductor market by 2030. This year, through industry-university-research discussions, the Ministry expanded to the program with the addition of 1.2 trillion won of investment over five years through 'Support Plan for AI Semiconductor Industry Promotion'. Accordingly, major universities began putting together programs devised to train students to develop expertise in AI semiconductors.

KAIST has accumulated top-notch educational and research capabilities in the two core fields of AI semiconductor - Semiconductor and Artificial Intelligence. Notably, in the field of semiconductors, the International Solid-State Circuit Conference (ISSCC) is the world's most prestigious conference about designing of semiconductor integrated circuit. Established in 1954, with more than 60% of the participants coming from companies including Samsung, Qualcomm, TSMC, and Intel, the conference naturally focuses on practical value of the studies from the industrial point-of-view, earning the nickname the ‘Semiconductor Design Olympics’. At such conference of legacy and influence, KAIST kept its presence widely visible over other participating universities, leading in terms of the number of accepted papers over world-class schools such as Massachusetts Institute of Technology (MIT) and Stanford for the past 17 years.

In terms of the number of papers accepted at the ISSCC, KAIST ranked among top two universities each year since 2006. Looking at the average number of accepted papers over the past 17 years, KAIST stands out as an unparalleled leader. The average number of KAIST papers adopted during the period of 17 years from 2006 through 2022, was 8.4, which is almost double of that of competitors like MIT (4.6) and UCLA (3.6). In Korea, it maintains the second place overall after Samsung, the undisputed number one in the semiconductor design field. Also, this year, KAIST was ranked first among universities participating at the Symposium on VLSI Technology and Circuits, an academic conference in the field of integrated circuits that rivals the ISSCC. 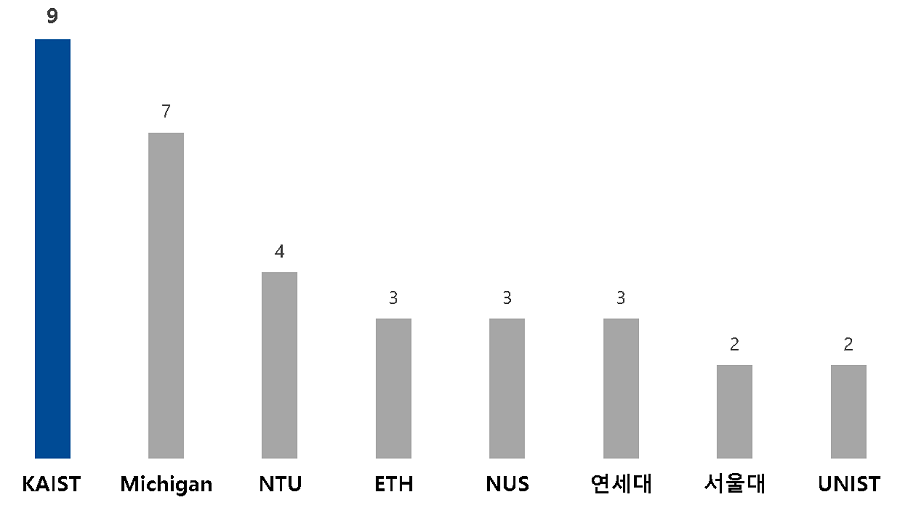 With KAIST researchers working and presenting new technologies at the frontiers of all key areas of the semiconductor industry, the quality of KAIST research is also maintained at the highest level. Professor Myoungsoo Jung's research team in the School of Electrical Engineering is actively working to develop heterogeneous computing environment with high energy efficiency in response to the industry's demand for high performance at low power. In the field of materials, a research team led by Professor Byong-Guk Park of the Department of Materials Science and Engineering developed the Spin Orbit Torque (SOT)-based Magnetic RAM (MRAM) memory that operates at least 10 times faster than conventional memories to suggest a way to overcome the limitations of the existing 'von Neumann structure'.

As such, while providing solutions to major challenges in the current semiconductor industry, the development of new technologies necessary to preoccupy new fields in the semiconductor industry are also very actively pursued. In the field of Quantum Computing, which is attracting attention as next-generation computing technology needed in order to take the lead in the fields of cryptography and nonlinear computation, Professor Sanghyeon Kim's research team in the School of Electrical Engineering presented the world's first 3D integrated quantum computing system at 2021 VLSI Symposium. In Neuromorphic Computing, which is expected to bring remarkable advancements in the field of artificial intelligence by utilizing the principles of the neurology, the research team of Professor Shinhyun Choi of School of Electrical Engineering is developing a next-generation memristor that mimics neurons.

The number of papers by the International Conference on Machine Learning (ICML) and the Conference on Neural Information Processing Systems (NeurIPS), two of the world’s most prestigious academic societies in the field of artificial intelligence (KAIST 6th in the world, 1st in Asia, in 2020)

The field of artificial intelligence has also grown rapidly. Based on the number of papers from the International Conference on Machine Learning (ICML) and the Conference on Neural Information Processing Systems (NeurIPS), two of the world's most prestigious conferences in the field of artificial intelligence, KAIST ranked 6th in the world in 2020 and 1st in Asia. Since 2012, KAIST's ranking steadily inclined from 37th to 6th, climbing 31 steps over the period of eight years. In 2021, 129 papers, or about 40%, of Korean papers published at 11 top artificial intelligence conferences were presented by KAIST. Thanks to KAIST's efforts, in 2021, Korea ranked sixth after the United States, China, United Kingdom, Canada, and Germany in terms of the number of papers published by global AI academic societies. 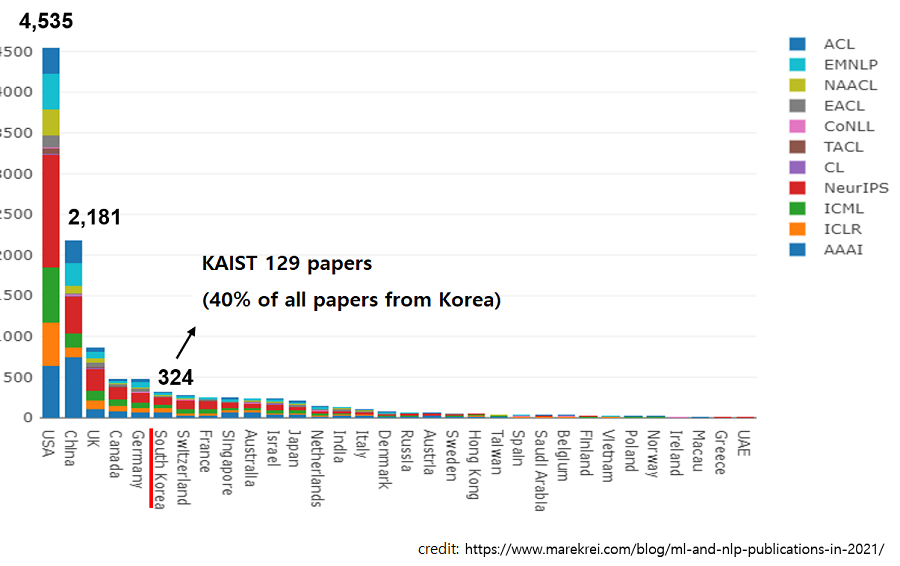 In terms of content, KAIST's AI research is also at the forefront. Professor Hoi-Jun Yoo's research team in the School of Electrical Engineering compensated for the shortcomings of the “edge networks” by implementing artificial intelligence real-time learning networks on mobile devices. In order to materialize artificial intelligence, data accumulation and a huge amount of computation is required. For this, a high-performance server takes care of massive computation, and for the user terminals, the “edge network” that collects data and performs simple computations are used. Professor Yoo's research greatly increased AI’s processing speed and performance by allotting the learning task to the user terminal as well.

In June, a research team led by Professor Min-Soo Kim of the School of Computing presented a solution that is essential for processing super-scale artificial intelligence models. The super-scale machine learning system developed by the research team is expected to achieve speeds up to 8.8 times faster than Google's Tensorflow or IBM's System DS, which are mainly used in the industry.

KAIST is also making remarkable achievements in the field of AI semiconductors. In 2020, Professor Minsoo Rhu's research team in the School of Electrical Engineering succeeded in developing the world's first AI semiconductor optimized for AI recommendation systems. Due to the nature of the AI recommendation system having to handle vast amounts of contents and user information, it quickly meets its limitation because of the information bottleneck when the process is operated through a general-purpose artificial intelligence system. Professor Minsoo Rhu's team developed a semiconductor that can achieve a speed that is 21 times faster than existing systems using the 'Processing-In-Memory (PIM)' technology. PIM is a technology that improves efficiency by performing the calculations in 'RAM', or random-access memory, which is usually only used to store data temporarily just before they are processed. When PIM technology is put out on the market, it is expected that fortify competitiveness of Korean companies in the AI ​​semiconductor market drastically, as they already hold great strength in the memory area.

KAIST does not plan to be complacent with its achievements, but is making various plans to further the distance from the competitors catching on in the fields of artificial intelligence, semiconductors, and AI semiconductors. Following the establishment of the first artificial intelligence research center in Korea in 1990, the Kim Jaechul AI Graduate School was opened in 2019 to sustain the supply chain of the experts in the field. In 2020, Artificial Intelligence Semiconductor System Research Center was launched to conduct convergent research on AI and semiconductors, which was followed by the establishment of the AI Institutes to promote “AI+X” research efforts.

Based on the internal capabilities accumulated through these efforts, KAIST is also making efforts to train human resources needed in these areas. KAIST established joint research centers with companies such as Naver, while collaborating with local governments such as Hwaseong City to simultaneously nurture professional manpower. Back in 2021, KAIST signed an agreement to establish the Semiconductor System Engineering Department with Samsung Electronics and are preparing a new semiconductor specialist training program. The newly established Department of Semiconductor System Engineering will select around 100 new students every year from 2023 and provide special scholarships to all students so that they can develop their professional skills. In addition, through close cooperation with the industry, they will receive special support which includes field trips and internships at Samsung Electronics, and joint workshops and on-site training.

KAIST has made a significant contribution to the growth of the Korean semiconductor industry ecosystem, producing 25% of doctoral workers in the domestic semiconductor field and 20% of CEOs of mid-sized and venture companies with doctoral degrees. With the dawn coming up on the AI ​​semiconductor ecosystem, whether KAIST will reprise the pivotal role seems to be the crucial point of business.