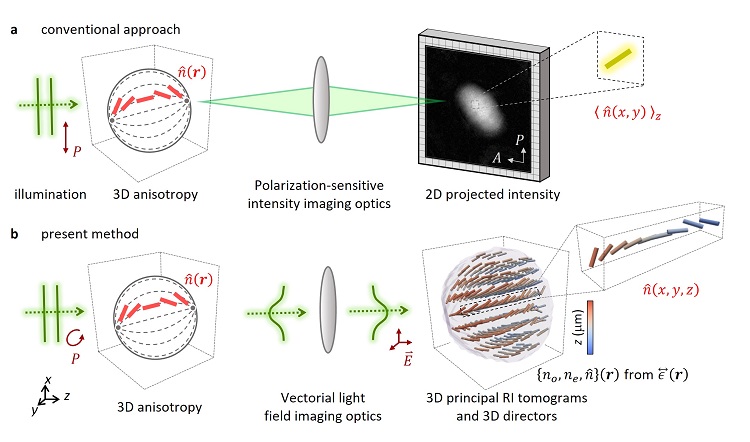 < Figure: Direct 3D anisotropy-imaging. a, Indirect access to 3D optical anisotropy using conventional methods. A 3D anisotropic sample is illuminated by polarized light (P), and its 2D images are recorded after passing through the analyser (A). This 2D polarization-sensitive imaging particularly conceals the axially inhomogeneous information of 3D anisotropy. The red rods depict the directors. á ñz denotes the average along the z axis. b, The present method directly visualizes 3D anisotropy. By solving the vectorial wave equation, 3D distribution of optical anisotropy is quantitatively reconstructed. no, ne, and e denote the ordinary RI, the extraordinary RI, and the dielectric tensor. >

Light-matter interactions are described by the dielectric tensor. Despite their importance in basic science and applications, it has not been possible to measure 3D dielectric tensors directly. The main challenge was due to the vectorial nature of light scattering from a 3D anisotropic structure. Previous approaches only addressed 3D anisotropic information indirectly and were limited to two-dimensional, qualitative, strict sample conditions or assumptions.

The research team developed a method enabling the tomographic reconstruction of 3D dielectric tensors without any preparation or assumptions. A sample is illuminated with a laser beam with various angles and circularly polarization states. Then, the light fields scattered from a sample are holographically measured and converted into vectorial diffraction components. Finally, by inversely solving a vectorial wave equation, the 3D dielectric tensor is reconstructed.

Professor YongKeun Park said, “There were a greater number of unknowns in direct measuring than with the conventional approach. We applied our approach to measure additional holographic images by slightly tilting the incident angle.”