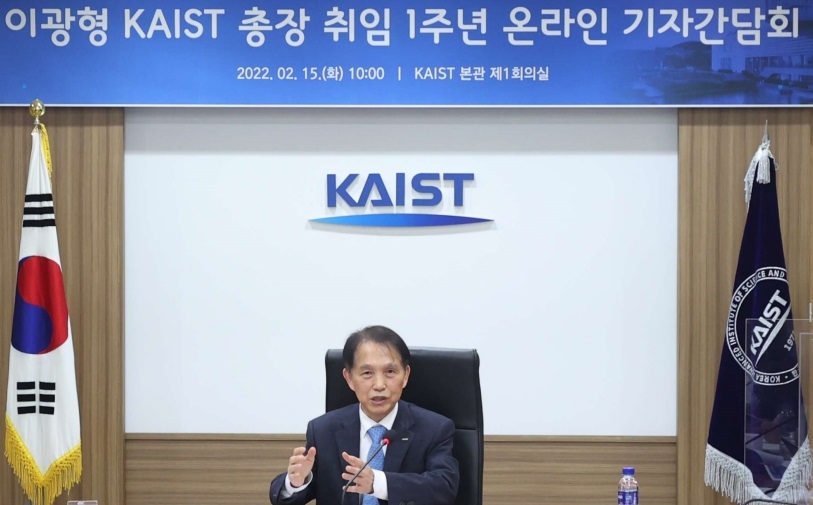 < President Lee holds a news conference marking the 1st anniversary of him becoming the president on February 15. >

KAIST President Kwang Hyung Lee said that nurturing medical scientists, semiconductor R&D personnel, startup entrepreneurs, and global innovators are key missions he will continue to pursue during an online news conference marking the 1st anniversary of him becoming the president  on February 15.

He said that nurturing physician-scientists is the most critical mission for KAIST to help the nation create a new growth engine. He said KAIST will help the nation drive the bio-industry and provide medical science resources for the nation’s health sector. To this end, he said that KAIST will open its Medical Science and Technology School by 2026.

The school aims to foster medical scientists whose research results will eventually be commercialized. He said that the university is now discussing revisions to related laws and regulations with the government and other universities.

To supply human resources to the semiconductor industry, President Lee said the university will add a campus in Pyongtaek City that will serve as an advanced convergence research hub in the field of next generation semiconductors in collaboration with Samsung Electronics and the city of Pyongtaek. The three-stage opening plan projected the final opening of the campus by 2036. During the first stage, which will be completed by 2026, it will construct the campus infrastructure in Pyongtaek city where Samsung Semiconductors runs two massive semiconductor complexes. By 2031, it plans to launch the open research platform including a future cities research center and future vehicles research center. The campus will open the global industrial collaboration cluster hub by 2036.

In the global arena, President Lee said he is working to open the New York campus with stakeholders in the United States. He announced the plan last December that was endorsed by New York-based entrepreneur Hee-Nam Bae, the chairman of Big Continent Inc. President Lee and Chairman Lee signed an MOU for the funding to open the campus in New York.

“We are discussing how to facilitate the plan and best accommodate the interests and potential of our students. Many ideas and plans are on the table and we think it will take longer than expected to finalize the plan,” explained President Lee.

However, he added that the basic idea is to offer art tech and health technology programs as well as an AI-based finance MBA at the New York campus, in addition to it serving as the startup accelerator of KAIST.

“We plan to list at least 10 KAIST startups on the KOSDAQ and two on the NASDAQ by 2031. KAIST Holdings also aims to nurture companies valued at a total of one billion KRW and earn 100 billion KRW in technology fees by 2031.