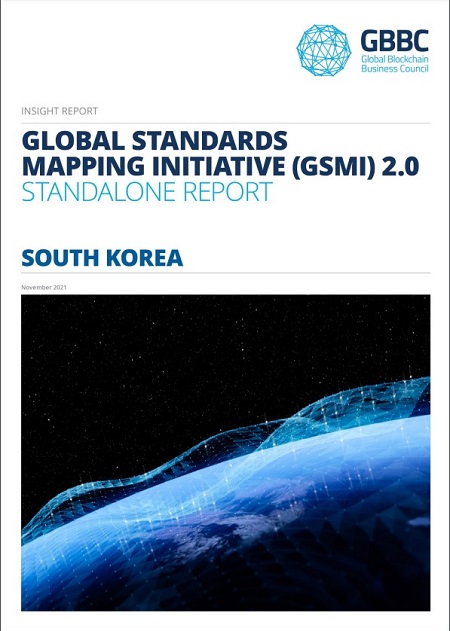 The KAIST Policy Center for the 4IR (KPC4IR), one of the nine working groups of the Global Blockchain Business Council (GBBC), published the Global Standards Mapping Initiative (GSMI) 2.0, highlighting Korea as an early adopter of blockchain. The report also offers an overview of how blockchain was adopted through an analysis of policy and business cases of South Korea.

In partnership with 131 institutions, GSMI 2.0 maps, catalogues, and analyzes data from 187 jurisdictions, 479 industry consortia, 38 technical standards, and 389 university courses and degree programs to provide a holistic view of the industry’s global activity.

Among the nine working groups, KAIST is the sole investigator for researching South Korea’s adoption of blockchain for policy and business. It says that in terms of policy and regulations for blockchain as a virtual asset, South Korea amended the Act on Reporting and Using Specific Financial Transaction Information to comply with the Financial Action Task Force’s recommendations.

The report also reviewed South Korea’s blockchain R&D. Seventeen ministries have funded 417 projects to cultivate blockchain inventions since 2015. Significantly, the Ministry of Science and ICT’s Blockchain Convergence Technology Development Program supported 50 projects between 2018 and 2021. Their R&D focused on virtual assets during the initial stage in 2015 and soon shifted its application to various domains, including identification and logistics.

The report noted that the Korea Customs Service was one of the first agencies in the world to introduce blockchain into customs clearance. Through collaborations with the private sector, the Korean government has also created the world’s first blockchain-based vaccination certification services and extended it to a globally integrated decentralized identity system.

Finally, the report states that these South Korean cases highlight three ambiguities in blockchain policies. First, blockchain involves both financial and industrial features. Thus, it needs a new regulatory framework that embraces the two features together.

Second, integrating services on a blockchain platform will bring forth seamless automation of industries across the manufacturing, financial, and public sectors. South Korea, which already has well-proven manufacturing capabilities, is in need of a comprehensive strategy to encompass multiple services on one platform.

Third, the two cases of the government’s adoption of blockchain suggest that innovations in blockchain can be facilitated through effective cooperation among government ministries and agencies regarding particular businesses in the private sector. Consequently, the government’s policy is not simply to invest in virtual assets but also to develop a virtual-physical world woven by blockchain. The new environment demands that South Korea transform its policy stances on blockchain, from specialization to comprehensiveness and cooperation.

Professor So Young Kim who heads the center said, “This report shows the main lessons from South Korea for other countries adopting blockchain. We will continue to work closely with our partners including the World Economic Forum to investigate many other global issues.”