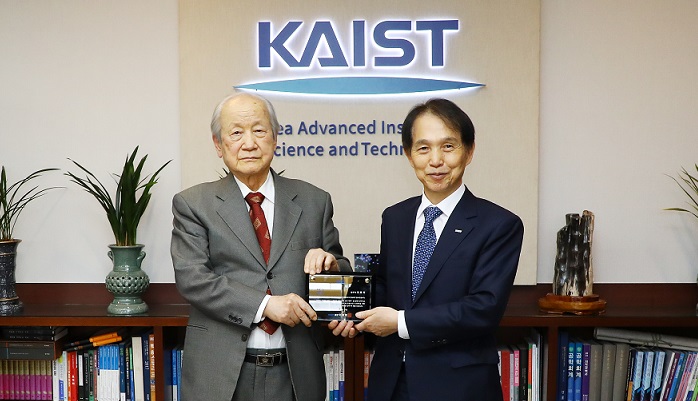 < President Lee (left) poses with Dong-Myoung Kim who donated 2 billion KRW to KAIST during a ceremony on December 6. >

Dong-Myong Kim, a 90-year-old resident living in Seongnam City in Kyonggido made a gift of 300 million KRW in cash and property valued at 1.7 billion KRW to fund the Kim Jae-Chul AI Graduate School. KAIST President Kwang Hyung Lee and a senior leadership team warmly received Kim during the donation ceremony on December 6 and delivered a plaque of appreciation.

Kim, a certified judicial scrivener, sent a letter regarding his intention to donate to the KAIST Development Foundation Office in October. Development foundation officers contacted him for a meeting and presented the major achievements of KAIST and new vision for the future during the meeting. After meeting with KAIST officials, Kim completed all the legal procedures for donating such as handing over the title of his property.

A Development Foundation official said that Kim was well aware of what KAIST has achieved and is doing now. “He had already searched KAIST’s website and scrutinized what we are doing now. He was clear about his intentions,” said the official.

Kim said that media news reports on the recent series of huge donations to KAIST inspired him. “I thought there was something special behind the donors’ intention to make such a decision.”

Kim said the studies on futurism he started in the 1980s led him to become interested in new technologies. “I firmly believe that KAIST will make huge contributions to the nation and our society through advances in science and technology. It is said that the joy of giving is much larger than that of receiving. I am now experiencing such immense joy. I will be even happier if KAIST can lead the nation through its AI research.”