The action adventure game ‘The Last of Us’ was a big hit worldwide in 2014. However, its sequel, the Last of Us Part II divided opinions in the game community when it was released in 2020.

A research team from the Games and Life Lab in the Graduate School of Culture Technology at KAIST analyzed why the game players’ reviews were so polarized and found that player-character relationships influenced the game players’ satisfaction. This study, published in Frontiers in Psychology, will help developers of character-driven games foresee how different players will react to their games. 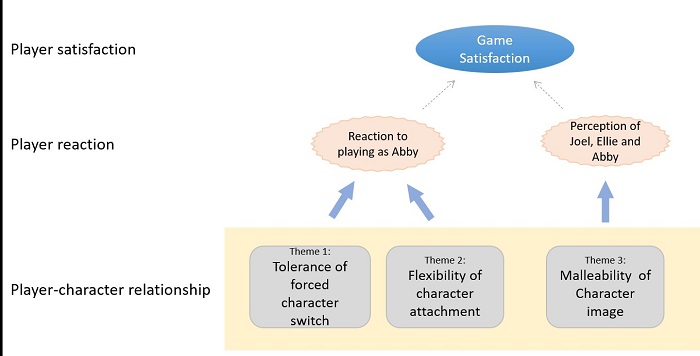 < Figure 2.Game satisfaction schematic view of the Last of Us II >

The team under Professor Young Yim Doh conducted in-depth interviews with 12 players from diverse nations, both those satisfied and dissatisfied with the game.

The team found that three elements affected the game players’ satisfaction. First, players’ satisfaction varied according to their tolerance of forced character switches. When a player is forced to switch their controlled figure in the game to another character that is introduced as the antagonist, most players initially had a negative reaction. The feeling of being forced to play in a way they didn’t want reduced their rights as a player. However, later on, some players viewed this character switch as an interesting transition and were more tolerant toward forced game play.

Second, the researchers found that the flexibility of character attachment is related to game satisfaction. Players who were unhappy about the game resisted building a relationship with the new antagonist character. Meanwhile, players who were happy about the game slowly formed an additional relationship with the new character. This led to the player feeling conflicting emotions, which satisfied players considered a meaningful experience of understanding a perspective of someone initially considered the enemy.

“Previous research on narrative games focused more on the game design than on the players’ experiences. To understand why reactions to the game were very different across players, we focused our research on differences in the players’ psychological experiences with the game.” said lead author and Master’s candidate Valérie Erb.

Co-author Dr. Seyeon Lee added, “This suggests that there is no one way to satisfy all players in a character-based narrative game. To satisfy a game’s players, it is important to understand the different players in the player base, target the right player group, and manage expectations accordingly.”

This research was supported by the Year 2020 Culture Technology R&D Program by the Ministry of Culture, Sports and Tourism and the Korea Creative Content Agency.