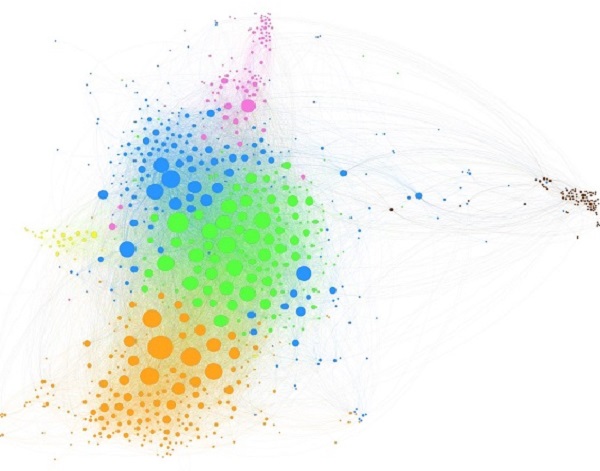 < Fig 1. Total citation network of DJs. The figure shows the total citation network of the DJs by adding up the temporal networks from each time window. The node size represents the total number of citations by other DJs. The edge weight is presented by the thickness of the edge. The color represents six groups of musical styles. Group 1 (blue/Progressive House), Group 2 (orange/Dubstep, Drum, & Bass), Group 3 (green/Electro House), Group 4 (pink/Trance), Group 5 (brown/Techno, Tech House), and Group 6 (yellow/Hardcore, Hard Dance). >

If you would like to succeed in your career, carve out your own distinctiveness, then break your boundaries along with collaborators. This sounds very common. However, a study on social networks has proven that is the recipe for success.

A recent research on electric dance music DJs’ music identity and their reputation found that music DJs with a distinct genre identity as well as network positions combining brokerage and cohesion tend to place higher in terms of their social standing.

What do Calvin Harris, the star of Electro house, Diplo, the icon of Moombahton & Trap, Sebastian Ingrosso, the master of Progressive House, and Armin Van Buuren, the leader of Trance have in common? One commonality of these star DJs in the electronic music market is that they are the leaders who build their genres with solid musical identities and are artists who constantly try experimental and innovative connections with other genres.

Professor Wonjae Lee and Dr. Hyeongseok Wi from the Graduate School of Culture and Technology analyzed the playlist data performed by electronic dance music (EDM) DJs at several EDM festivals that were popular around the world before COVID-19 and the track data that they released during that period.

“This study investigates how social standing is attained within a professional group of artists whose members play a key role in evaluating their artistic products in the EDM market,” said Professor Lee.

Particularly, the team considered DJs' social standing as an effective means of ensuring the quality of their artwork in emerging music markets such as EDM and identified two important factors, the musical identity and the social position within the professional DJ’s group.

They analyzed the data from 3,164 playlists of 815 DJs who performed at nine festivals held from 2013 to 2016 as a sort of citation network among DJs, and transformed it into network data to measure social positions among the DJs. They considered the DJs who received a lot of citations from other DJs as having a high social standing. In addition, the genre, beats per minute (BPM), and key scale data of the songs released during the period were quantified to analyze the association with the musical identity.

First, the results of analysis of the released track data demonstrated that focused distinct musical identity is correlated with social standing among EDM DJs. The EDM market is an emerging specialist market that is constantly developing and differentiating new styles and genres. It includes artists who establish value criteria and demarcate categorical space into separate identity positions reflecting the artistic forms of a similar type.

Second, this study focuses on the two advantages of two types of social positioning, brokerage and cohesive, which can effectively reduce uncertainty in the market. The results show that DJs with a hybrid position, combining elements of both brokerage and cohesion, have higher social standing. This hybrid position is the most advantageous position for controlling new opportunities and inflows of resources and for utilizing them. Unlike existing studies that divide the merits of the two positions into a dichotomy, this study follows the practice of recent studies that show that the two positions can generate synergy in a complementary manner.

The remix culture prominent in EDM provides a convincing explanation for this phenomenon. Because constructing playlist sets represents a DJ’s main specialty, the ability to creatively combine a variety of tracks using one’s own artistic style is crucial. To showcase their remix skills, DJs skillfully select tracks to maximize the displays of their talent. Recognized DJs prefer to select tracks from other genres, borrowing from existing contexts and creating new reinterpretations while drawing upon their own musical backgrounds.

“Acquiring social acknowledgement within a professional group is an effective way to ensure the quality of products they produce and a strong reputation,” explained Professor Lee.

The research team also pointed out the unique case of Techno DJs, who are showing Galápagos syndrome by avoiding crossover between genres and sticking to their own musical identity, unlike most genres in EDM. This research was reported in PLos ONE on Aug. 25 and funded by KAIST and the BK21 Plus Postgraduate Organization for Content Science. 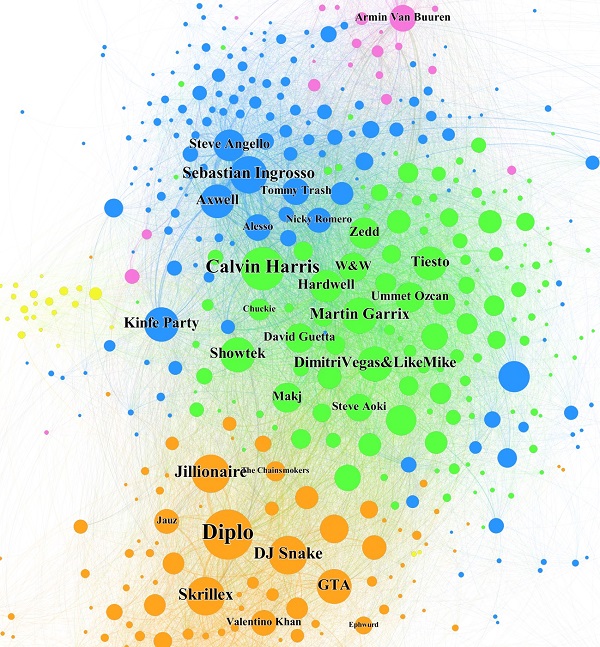 < Fig 2. Location of the 30 most cited DJs in the citation network. The figure is an enlargement of the central part of Figure 4. The name-tagged DJs are star DJs with high social standing. >