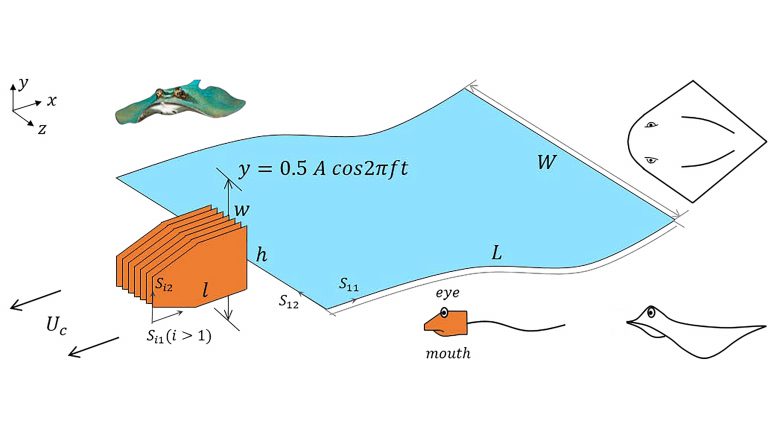 < Schematic of the self-propelled flexible plate with eyes and mouth. Credit: Qi-an Mao >

With their compressed bodies and flexible pectoral fins, stingrays have evolved to become one of nature’s most efficient swimmers. Scientists have long wondered about the role played by their protruding eyes and mouths, which one might expect to be hydrodynamic disadvantages.

Professor Hyung Jin Sung and his colleagues have discovered how such features on simulated stingrays affect a range of forces involved in propulsion, such as pressure and vorticity. Despite what one might expect, their research team found these protruding features actually help streamline the stingrays.

To illustrate the complex interplay between hydrodynamic forces, the researchers set to work creating a computer model of a self-propelled flexible plate. They clamped the front end of the model and then forced it to mimic the up-and-down harmonic oscillations stingrays use to propel themselves.

To re-create the effect of the eyes and mouth on the surrounding water, the team simulated multiple rigid plates on the model. They compared this model to one without eyes and a mouth using a technique called the penalty immersed boundary method.

“Managing random fish swimming and isolating the desired purpose of the measurements from numerous factors was difficult,” Sung said. “To overcome these limitations, the penalty immersed boundary method was adopted to find the hydrodynamic benefits of the protruding eyes and mouth.”

The team discovered that the eyes and mouth generated a vortex of flow in the forward-backward , which increased negative pressure at the simulated animal’s front, and a side-to-side vortex that increased the pressure difference above and below the stingray. The result was increased thrust and accelerated cruising.

Further analysis showed that the eyes and mouth increased overall propulsion efficiency by more than 20.5% and 10.6%, respectively.

Researchers hope their work, driven by curiosity, further stokes interest in exploring fluid phenomena in nature. They are hoping to find ways to adapt this for next-generation water vehicle designs based more closely on marine animals.

This study was supported by the National Research Foundation of Korea and the State Scholar Fund from the China Scholarship Council.

-News release from the American Institute of Physics, Aug.31, 2021