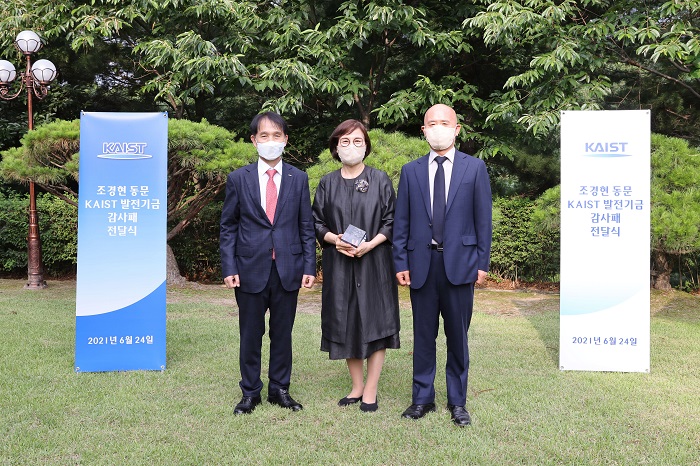 Professor Cho, a graduate of the School of Computing in 2011 completed his master’s and PhD at Alto University in Finland in 2014. He has been teaching at NYU since 2015 and received the Samsung Ho-Am Prize for Engineering this year in recognition of his outstanding researches in the fields of machine learning and AI.

“I hope this will encourage young female students to continue their studies in computer science and encourage others to join the discipline in the future, thereby contributing to building a more diverse community of computer scientists,” he said in his written message. His parents and President Kwang Hyung Lee attended the donation ceremony held at the Daejeon campus on June 24.

Professor Cho has developed neural network machine learning translation algorithm that is widely being used in translation engines. His contributions to AI-powered translations and innovation in the industry led him to win one of the most prestigious prizes in Korea.

He decided to donate his 300 million KRW prize money to fund two 100 million KRW scholarships named after each of his parents: the Lim Mi-Sook Scholarship is for female computer scientists and the Bae-Gyu Scholarly Award for Classics is in honor of his father, who is a Korean literature professor at Soongsil University in Korea. He will also fund a scholarship at Alto University.

“I recall there were less than five female students out of 70 students in my cohort during my undergraduate studies at KAIST even in later 2000s. Back then, it just felt natural that boys majored computer science and girls in biology.”

He said he wanted to acknowledge his mother, who had to give up her teaching career in the 1980s to take care of her children. “It made all of us think more about the burden of raising children that is placed often disproportionately on mothers and how it should be better distributed among parents, relatives, and society in order to ensure and maximize equity in education as well as career development and advances.”

He added, “As a small step to help build a more diverse environment, I have decided to donate to this fund to provide a small supplement to the small group of female students majoring in computer science.