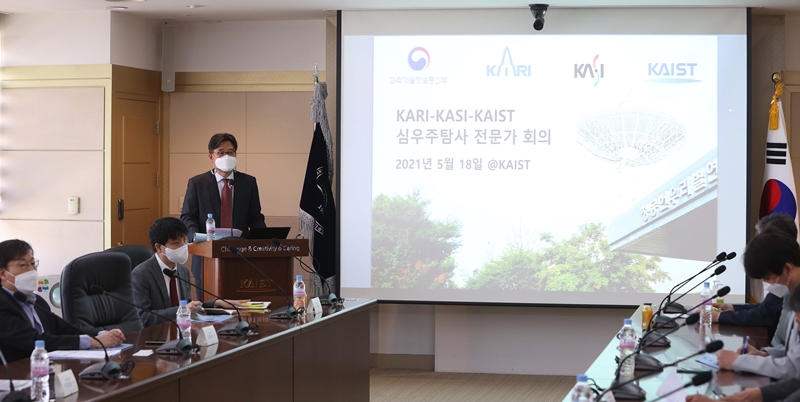 < A meeting to discuss medium- and long-term deep space exploration plans and collaborations among KAIST, KARI, and KASI were held recently at KAIST campus. >

The three entities have cooperated in scientific research for the last 30 years during which Korea has been developing its space exploration expertise. They signed the MoU for Cooperation for R&D and Industrialization on Deep Space Exploration’ last December. The research consortium will share and discuss research plans for space science research and exploration technology, and contribute to planning the nation’s deep space exploration.

At the meeting, KAIST reported its plans to return KITSAT-1 to Earth, Korea’s first satellite using local technology, and to explore the radiation belt (the Van Allen belt) around Earth. KAIST launched Korea’s first satellite KITSAT-1 in 1992. Meanwhile, KARI shared their plans to launch a lunar landing module using a Korean Space Launch Vehicle by 2030 and explained the current technologies and research related to a lunar landing and space exploration. Based on the payload technology it has been building on for the last 20 years, KASI emphasized the importance of research for deep space exploration in relation to the formation of the universe and the origin of mankind.

Vice Minister of Science and Technology Yong also stressed that “to enhance Korea’s capabilities for space research after launching our space launch vehicle, Nuri, in October, there must be continued efforts and preparation for higher level space research, including space exploration planning. The various experts’ opinions discussed in today’s meeting will be taken into consideration for governmental policies related to the ‘National Space Exploration Roadmap’ to be established in the latter half of this year.”