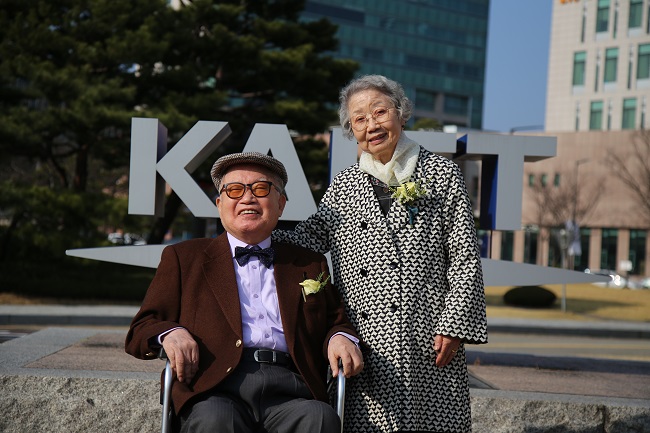 A self-made elderly couple in their 90s made a 20 billion KRW donation to KAIST on March 13. Chairman of Samsung Brush Sung-Hwan Chang and his wife Ha-Ok Ahn gave away their two properties valued at 20 billion in Nonhyon-dong in Seoul to KAIST during a ceremony on March 13 in Seoul.

Chairman Chang, 92, made a huge fortune starting his business manufacturing cosmetic brushes. Building two factories in China, he expanded his business to export to high-end cosmetic companies. Chairman Chang, a native of North Korea, is a refugee who fled his hometown with his sister at age 18 during the Korean War. He said remembering his mother who was left behind in North Korea was the most painful thing.

“We always wanted to help out people in need when we would earn enough money. We were inspired by our friends at our retirement community who made a donation to KAIST several years ago. We believe this is the right time to make this decision,” said Chairman Chang.

“It would be the most meaningful way if we could invest in KAIST for the country’s future,” said Chairman Chang. “I talked a lot with Chairman Kim on how KAIST utilizes its donations and have developed a strong belief in the future of KAIST.”

Chairman and Mrs. Chang already toured the campus several times at the invitation of President Kwang-Hyung Lee and President Lee himself presented the vision of KAIST to the couple. The couple also attended President Lee’s inauguration ceremony on March 8.

President Lee thanked the couple for their donation, saying “I take my hat off to Chairman Chang and his wife for their generous donation that was amassed over their lifetime. They lived very fiscally responsible lives. We will efficiently utilize this fund for educating future global talents."