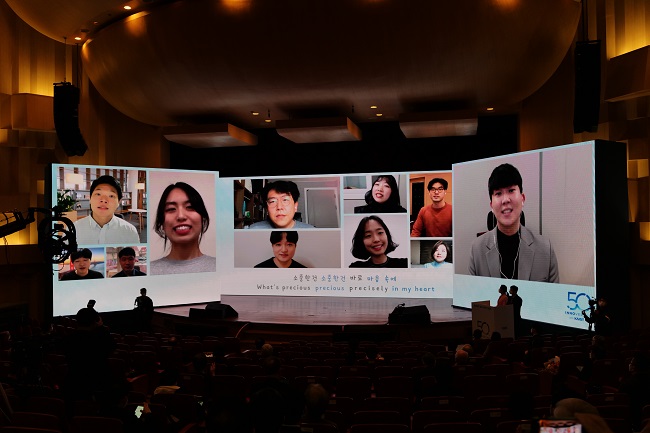 < The official ceremony to celebrate the 50th anniversary was held on February 16. >

KAIST reaffirmed its goal of becoming an institute that can serve the world for the next century, marking its 50th anniversary on February 16. The KAIST community and distinguished guests gathered online during the official ceremony to commemorate KAIST’s anniversary and envisioned ways to serve the world, a major shift from its founding mission focusing on national growth.

The ceremony celebrated the legacy of KAIST, which has become a trailblazer by fostering the most competent scientists and engineers and making breakthroughs which led to the nation becoming a global high-tech leader.

“KAIST has overcome challenges and created innovations for advancing the nation, from the first internet network to launching our first satellite in the early 80s to the Mobile Clinic Module (MCM), a negative pressure ward module in response to COVID-19. Whenever the nation faced a challenge, KAIST was there.”

President Moon also asked KAIST researchers to find sustainable ways to balance nature and humanity in this time of climate change and the Fourth Industrial Revolution.

Executive Chairman of the World Economic Forum Dr.Klaus Schwab also congratulated, saying "KAIST is a leader in ensuring social inclusion. Founded with the support of USAID, today it is paying it forward and sharing the same support through the Kenya-KAIST project." 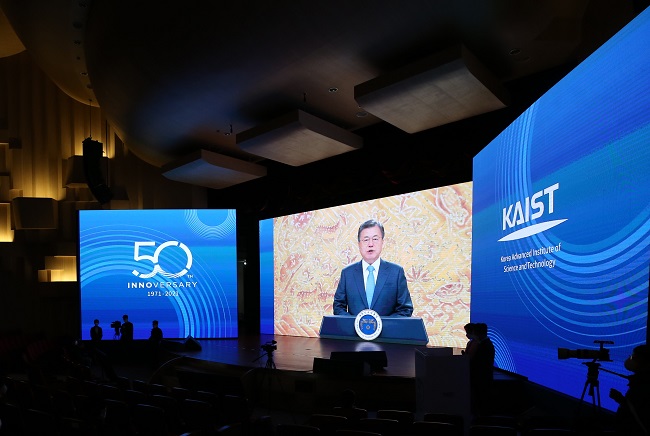 < President Moon Jae-In said that the dream of KAIST has been the dream of Korea. KAIST is the future of Korea in his congratulatory message during the ceremony. >

The ceremony first brought Dr. KunMo Chung to the stage, the man who proposed the idea of founding the first advanced science and technology institute in Korea. His proposal to the then administrator of USAID John Hannah resulted in the Korean government meriting a 6 million USD loan for to start KAIST. He was the only Korean member of the USAID feasibility study team led by Dr. Frederick Terman, the former vice president of Stanford University. Dr. Chung wrote the Terman Report, which gave a green light to the establishment of KAIST in Korea in 1970.

Dr. Chung said the nation’s strong desire to escape from poverty through the advancement of science and technology was thoroughly realized by KAIST. “The Terman Report’s vision was perfectly realized. Now it’s time to envision the next dream of KAIST for another century.”

President Sung-Chul Shin said in his anniversary speech that KAIST has now transformed into a university that will serve the all of humanity by advancing science and technology while fostering new talents best fit for the new global environment. President Shin said that to fulfill KAIST’s second dream, the university will drive innovation in the five major areas of education, research, technology commercialization, globalization, and future strategy, under the C3 spirit of a Challenging spirit, Creativity, and Caring minds.

“In the next 50 years, KAIST hopes to fulfill the 10-10-10 Dream, that is, to have 10 Singularity Professors who have produced world-class achievements, 10 Decacorn startups valued at 10 trillion won, and global campuses in 10 countries.” 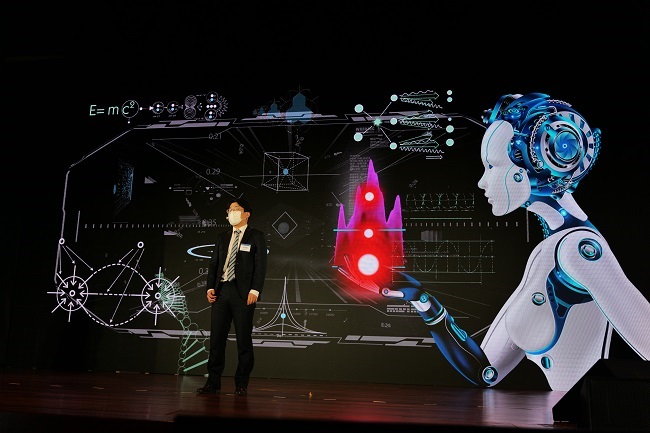 < Four young KAIST professors who are conducting research in the flagship fields of mobility, new materials, post-AI, and bio-medicine presented their research vision. >

Then, four young KAIST professors who are conducting research in the flagship fields of mobility, new materials, post-AI, and bio-medicine presented their research vision and gave speeches. Professor Hae-Won Park from the Department of Mechanical Engineering and Professor Jihyeon Yeom from the Department of Materials Science and Engineering said the advent of new mobility combined with robotics and new nano-materials scaled down into spintronics, ‘KAISTronic materials’, will provide new momentum for the industry and the wellbeing of humanity. Professor Kijung Shin from the Graduate School of AI spoke on the new future transformed by quantum computers. Professor Young Seok Ju from the Graduate School of Medical Science and Engineering predicted a future in which cancer will no longer be a terminal disease and digital cells and the digitization of bio-medicine will significantly improve our quality of life. He said the combination of anti-aging and reverse aging studies will make a difference in our lives.

After the official ceremony, KAIST’s administrative leadership including President Shin and Dr. Kun-Mo Chung attended a ceremony to dedicate the sky lounge at the Academic Cultural Complex as the John Hannah Hall. Terman Hall, located in the Creative Learning Building, was dedicated in 2004 in honor of Dr. Frederick Terman. 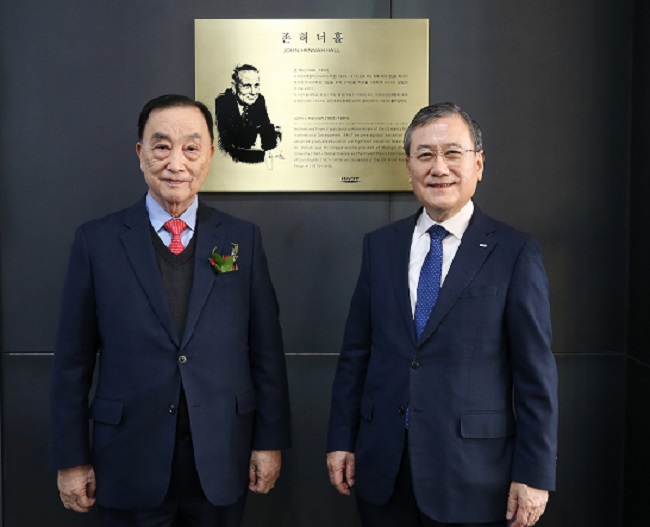 < President Shin and Dr.Chung pose at the John Hannah Hall. >