Six major organizations including KAIST have joined forces to help Daejeon City to win the government approval to build the envisioned Korean Brain Institute in Daedeok Research Complex.
The six organizations signed a memorandum of understanding on cooperating in establishing the government-funded institute built within the Daedeok Research Complex in the city of Daejeon, at  KAIST on Jan. 14. The six organizations are KAIST, the Daejeon City Government, Korea Research Institute of Bioscience and Biotechnology, Korea Research Institute of Standard and Science, Asan Medical Center, and SK Corp., a pioneer in effective therapeutic invention for serious brain disorders.

The partnership of the six organizations is expected to bring a  broad-based cooperation opportunities and create a massive synergy effect in the brain science researches and the development of new therapeutic treatment for brain disorders by combining their resources and infrastructures.

The six organizations have also built an international research network with such globally-renowned brain research institutions as RIKEN, a large natural sciences research institute in Japan, Max Plank Institute in Germany, Federal Institute of Technology, Lausanne, in Switzerland and Brain Research Institute of University of Queensland in Australia. The research network is under the support and guidance of Dennis Choi, a prominent neuroscientist who once served as the President of the Society for Neuroscience and is currently a professor in the Departments of Neurology and biology at Emory University.

The tentatively titled Korea Brain Institute is envisioned to help fight brain disorders and create Korea"s new growth engine, as well as lengthening life span, by conducting convergence researches in nero science, brain science and pharmacology. If the consortium of the six organizations wins the government approval to build the proposed institute within the Daedeok complex, the central government and the Daejeon city government are expected to pour a total of 329.7 billion won into the project by 2020. 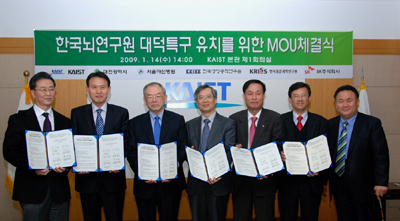