A KAIST research team led by Prof. Se-Jin Kwon at the Department of Aerospace Engineering has unveiled a small lunar module developed in cooperation with engineers at a local company, Space Solutions, university authorities said on Thursday (Nov. 27).

The home-made lunar module, the vehicle that conducts survey on the surface of the moon, is 40 centimeters tall and weighs 25 kg. Equipped with a liquid-fuel rocket engine with a maximum thrust of 350 newtons (N), it  is capable of carrying objects weighing around 20 kg to the lunar space from the space ship. Professor Kwon"s team held a demonstration of the lander for journalists at a KAIST lab on Friday (Nov. 28).

Lunar landers are critical in developing lunar spacecraft, and countries with advanced aerospace technologies have been careful to protect their core technologies.

According to Prof. Kwon, every part of the rocket engine, including the catalyst, was home made. The rocket"s propulsion system features a state-of-the-art propellant valve developed by Space Solutions, which enables thrust control.

Lunar modules between the 100 and 200 kilogram range, developed by NASA (U.S. National Aeronautics and Space Administration), costs around $100 million, said Kwon. "It is expensive to guarantee the safety of developers of an American module because the fuel contains carcinogens. But the rocket engine created by KAIST team could cut development costs to about half that because it is powered by environmentally friendly fuel," he said.

The lander, product of a six-year-long effort, represents remarkable advancement in the technology for developing spacecraft for lunar missions. 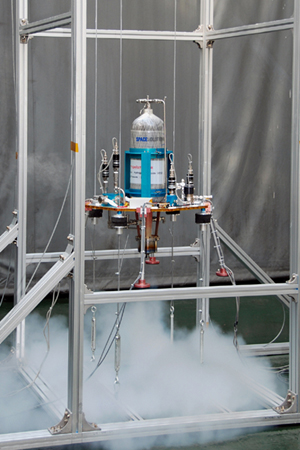