The new technology is significant in that it is based on a titanium dioxide, the first such attempt in the world, while the technologies patented by the United States and Japan are based on ZnO.

Researchers will continue to work on securing technological reliability and developing a technology to mass-produce in a large-scale chemical vapor deposition equipment for the next couple of years.

"The development of technology to produce transparent thin film transistor will help Korean LCD makers reduce its dependence on foreign technologies, as well as maintain Korea"s status as a leader of the world"s display industry," said Prof. Park.

KAIST has applied for local patent registration of the technology and the process is expected to complete by this October or November. International patents have been also applied for in the U.S., Japan and Europe.

The new technology was introduced in the latest edition of the Electron Device Letters, a journal published by the Institute of Electrical and Electronics Engineers or IEEE, a New York-based international non-profit, professional organization for the advancement of technology related to electricity. It will be presented at the International Display Workshop 2008 on Dec. 5 in Niigata, Japan. 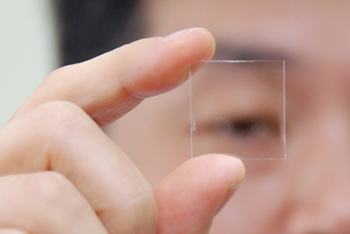