The 2008 International Conference for the Integration of Science and Technology into Society (ICISTS-KAIST) opened a four-day meeting on Tuesday (July 15) at Daejeon KAIST campus. The conference is an annual event organized by a group of KAIST undergraduate students.

The fifth-year gathering is designed to provide participants with an opportunity to broaden their scientific perspectives by sharing ideas and experiences in related topics, as well as building an international human network. This year"s event has drawn about 200 students from 40 countries.

The centerpiece of the conference is three workshops on the following themes; Human-Robot Symbiotic Society, Neo-brain Science and Trafficmatics. Myung-Ja Kim, former Korean Environment Minister, will appear as a keynote speaker.

In the workshop sessions, two speakers will discuss specific issues and arrive at a tentative conclusion. Participants will have the opportunity to participate in the debate through Q&A for each session.

The second theme "Neo-Brain Science" focuses on attempts to shed light on brain from diverse perspectives including psychology, economics and art. Among invited speakers are Prof. Jai-Seung Jung at the Department of Bio and Brain Engineering, KAIST; Prof. Un-Jung Kang at the University of Chicago Medical Center; and Peter Geyer, a consultant for the Association for Psychological Type.

The third workshop on "Traffimatics" will deal with "intelligent transport systems (ITS)" which will discusst new paradigm in transportation policy and traffic engineering. On the list of speakers are Assaf Biderman, assistant director, SENSEable City Laboratory, MIT; Prof. Richard Tay, at the Department of Civil Engineering, University of Calgary; Prof. Shoshi Mizokami at Kumamoto University; and Ho-Jong Baik, research associate professor of Virginia Tech. 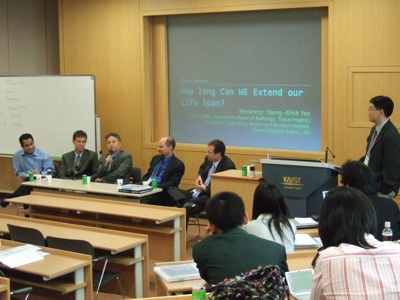