- Named as the recipient of Dupont Science & Technology Award of 2007
- In recognition of his development of optical?bio-functional photonic crystal structures through Self-assembly of nanoparticles

Seung-Man Yang, a professor of Chemical and Biomolecular Engineering of KAIST (President Nam Pyo Suh) and the president of the National Creative Research Initiatives Center for Photon and Fluid Integrated Circuit by the Ministry of Science and Technology, has been named as the recipient of Dupont Science & Technology Award.

Dupont Korea, associate of Dupont, a world-class science firm, has established and conferred ‘Dupont Science & Technology Award’ since 2002 to promote basic sciences and industrial development of Korea. Dupont Science & Technology Awards are awarded to scientists of universities or state-run institutes who have made outstanding R&D achievements in the fields of Chemistry, Chemical Engineering, Material Science and Material Engineering within five years. Dupont Korea announced on May 2, 2007 that Professor Yang is the recipient of the award this year, following the strict examination by the Koran Academy of Science and Technology (KAST).

The reason for the award is Professor Yang’s development of prototype optical?bio-functional photonic crystal structures that can process a huge amount of data, resulting from a study that has discovered the principle of Self-assembly where multifunctional nanoparticles are manufactured and assembled for themselves.

Professor Yang’s recent research result about photon structures and nano patterns was published by Nature (February 2, 2006 edition); posted on Heart-Cut, the portal site of the American Chemistry Society (ACS), as highlight paper two times (November 4, 2002 and May 1, 2006); and introduced at Research/Researcher of MRS Bulletin by the U.S. Material Research Society (MRS) as main paper in December 2003. Professor Yang is very famous in Korea and abroad for the excellences of his research achievements and has made request seminars at Harvard University, University of Wisconsin, Caltech, University of California, etc. He is also invited speaker and session organizer of the MRS and the SPIE. 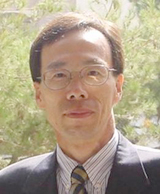