- Geo-Centrifuge experiment center of an area of about 1,712 square meters and an estimated construction cost of total 8.4 billion won

A two-story building with a basement occupying an area of about 1,712 square meters will become a landmark laboratory in the field of geotechnical engineering that can be used for the education, research, and social infrastructure design by universities, institutes, and corporations via high-speed information and communication network. The estimated construction cost is 8.4 billion won.

The center will be composed of experiment building including geo-centrifuge laboratory, model-making room, workshop, geotechnical engineering laboratory, and specimen storehouse; and research building including control room, video conference room, electronic library, and research rooms. A variety of convenience facilities for researchers and video conference and remote monitoring system, with which researcher at remote distances can directly participate in experiments, will be provided in the research building, and world’s top-class experiment equipment such as geo-centrifuge with a turning radius of 5 meters, a maximum acceleration of 130 G (130 times faster than the acceleration of gravity), a preload of 2,400 kg and bidirectional shaking-table that can reproduce earthquakes-like wave during experiments, and robots that can reproduce construction procedures by a remote control will be installed.

Geo-Centrifuge experiment refers to an experiment that reproduces natural disaster-like motions by making miniatures of large-scale ground structures such as dams, slopes, etc. and using centrifugal forces generated from high-speed rotation. This experiment can easily and rapidly reproduce actual motions of ground structures at a low cost, thereby being widely used for various geotechnical engineering researches such as evaluation of seismic safety, movement of soft ground, slope stability analysis, etc. The causes of the embankment collapse in New Orleans by Hurricane Katrina in 2005 were also revealed by simulation tests by this experiment.

“The center will make possible a variety of experiments and researches that have never been available in Korea due to the lack of experiment infrastructure, therefore activate researches over the design and construction of large-scale social infrastructures. Making possible civil engineering researches demanding the use of large-scale equipment like Centrifuge, severely dependent on overseas technologies so far, will enhance the global competitiveness of Korean construction industry,” said Dong-soo Kim, President of the center. 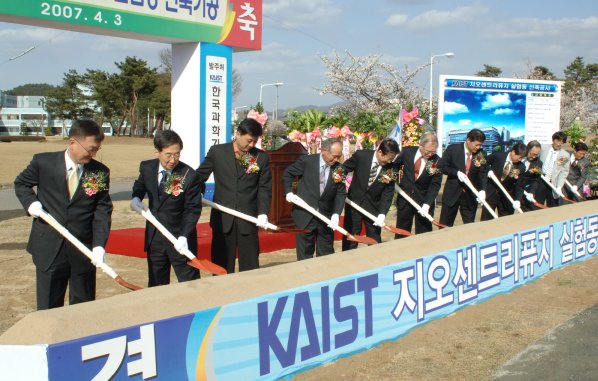