In this digital era, there has been growing concern that children spend most of their playtime watching TV, playing computer games, and staring at mobile phones with ‘head-down’ posture even outdoors.

Playing is a large part of enjoyable and rewarding lives, especially for children. Previously, a large part of children’s playtime used to take place outdoors, and playing outdoors has long been praised for playing an essential role in providing opportunities to perform physical activity, improve social skills, and boost imaginative thinking.

Motivated by these concerns, a KAIST research team led by Professor Woohun Lee and his researcher Jiwoo Hong from the Department of Industrial Design made use of sound augmentation, which is beneficial for motivating playful experiences by facilitating imagination and enhancing social awareness with its ambient and omnidirectional characteristics.

Despite the beneficial characteristics of sound augmentation, only a few studies have explored sound interaction as a technology to augment outdoor play due to its abstractness when conveying information in an open space outdoors. There is also a lack of empirical evidence regarding its effect on children's play experiences.

Children equipped with SoundWear were allowed to explore multiple sounds (i.e., everyday and instrumental sounds) on SoundPalette, pick a desired sound, generate the sound with a swinging movement, and transfer the sound between multiple devices for their outdoor play.

Both the quantitative and qualitative results of a user study indicated that augmenting playtime with everyday sounds triggered children’s imagination and resulted in distinct play behaviors, whereas instrumental sounds were transparently integrated with existing outdoor games while fully preserving play benefits in physical, social, and imaginative ways.

The team also found that the gestural interaction of SoundWear and the free sound choice on SoundPalette helped children to gain a sense of achievement and ownership toward sound. This led children to be physically and socially active while playing.

Professor Lee also envisioned that the findings being helpful to parents and educators saying, “I hope the verified effect of digital technology on children’s play informs parents and educators to help them make more informed decisions and incorporate the playful and creative usage of new media, such as mobile phones and smart toys, for young children.”

This research titled “SoundWear: Effect of Non-speech Sound Augmentation on the Outdoor Play Experience of Children” was presented at DIS 2020 (the ACM Conference on Designing Interactive Systems) taking place virtually in Eindhoven, Netherlands, from July 6 to 20. This work received an Honorable Mention Award for being in the top 5% of all the submissions to the conference. 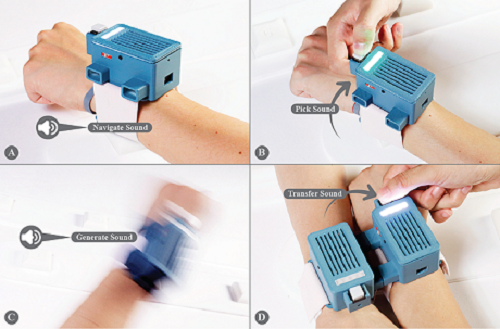 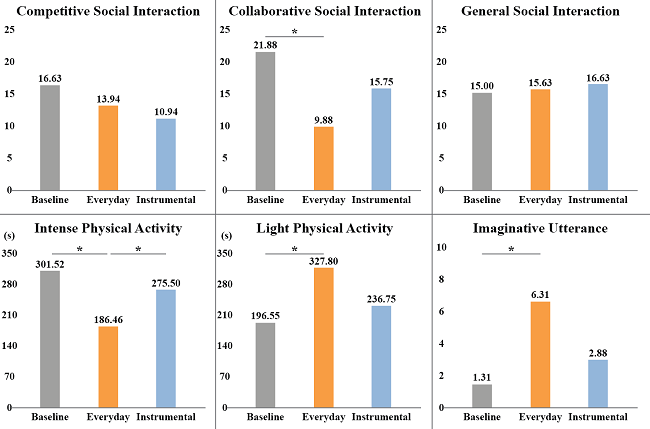 < Figure 2. Differences in social interaction, physical activity, and imaginative utterances under the condition of baseline, everyday sound, and instrumental sound >