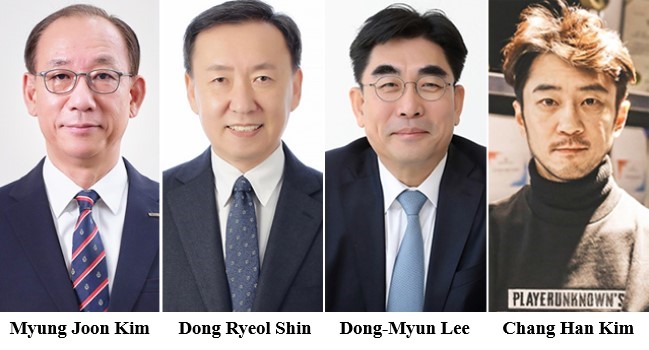 The KAIST Alumni Association (KAA) announced four recipients of the Distinguished Alumni Awards for the year 2019. The awards ceremony took place during the New Year Alumni Reception on January 18, 2020 in Seoul.

The Distinguished Alumni Awards recognize graduates who have achieved outstanding accomplishments in their professional and personal lives, and who have been an inspiration to fellow alumni and students in Korea and around the globe. The four distinguished alumni of the year 2019 are listed below.

Myung Joon Kim (School of Computing, M.S., Class of ’78), the President of the Electronics and Telecommunications Research Institute (ETRI), is a renowned expert in software engineering who has served as the president of the Administration Division and ICT Creative Research Laboratory of ETRI. His research and leadership have contributed to fortifying the nation’s IT and electronic industry competitiveness.

Dong Ryeol Shin (School of Electrical Engineering, M.S., Class of ’80), the President of Sungkyunkwan University, is a well-versed expert experienced in both academia and industry. He suggested many creative interdisciplinary educational policies and innovative education programs to lead the way in the Fourth Industrial Revolution, and fostered talents who will go on to be the foundation of national development.

Dong-Myun Lee (School of Electrical Engineering, M.S., Class of ’85, Ph.D., Class of ‘87), the CTO and the head of the Institute of Convergence Technology in KT Corporation, is a creative and practical research innovator. He raised the nation’s competitiveness by leading the development of the high-speed communication network industry and the global expansion of next-generation technology business.

Chang Han Kim (School of Computing, B.S., Class of ’92, M.S., Class of ’97, Ph.D., Class of ’98), the CEO of PUBG Corporation, has contributed greatly to the development of the IT contents industry. He developed PlayerUnknown’s Battlegrounds, a game that has become a global sensation.

Since the establishment of the award in 1992, a total of 103 alumni at home and abroad have been honored as recipients, and brought distinction to the university.

These recipients are playing major roles in society, and some of the notable awardees include: KAIST President Sung-Chul Shin (2010), Samsung Electronics Vice Chairman Ki-Nam Kim (2012), Nexon Chairman Jung-Ju Kim (2007), and the former Science and Technology Advisor to the President Kong-Joo Lee (2005).

The President of KAA and the CEO of Inbody Co Ltd., Ki-Chul Cha, said, “The Distinguished Alumni Awards are honor given to the alumni who contributed to the development of the nation and society, and raised the name of their alma mater.” He added, “We can tell the proud position of KAIST in the global arena just by looking at the accomplishments of the previous awardees.”