Professor Woontack Woo of the Graduate School of Culture Technology at KAIST participated in the Smart Cloud Show, a technology exhibition, hosted by the university’s Augmented Human Research Center and presented the latest development of his research, an optical platform system for augmented reality.

At the event, Professor Woo introduced a smart glass with an embedded augmented reality system, which permits remote collaboration between an avatar and the user’s hand.

The previous remote collaboration was difficult for ordinary users to employ because of its two-dimensional screen and complicated virtual reality system.

The key to this technology is the stable, real-time hand-tracking technique that allows the detection of the hand’s locations and the recognition of finger movements even in situations of self-occlusion.

Through this method, a user can touch and manipulate augmented contents as if they were real-life objects, thereby collaborating remotely with another user who is physically distant by linking his or her movements with an avatar.

If this technology is adopted widely, it may bring some economic benefits such as increased productivity due to lower costs for mobility and reduction in social overhead costs from the decrease in the need of traveling long distance.

Professor Woo said, “This technology will provide us with a greater opportunity for collaboration, not necessarily restricted to physical travelling, which can be widely used in the fields of medicine, education, entertainment, and tourism.”

Professor Woo plans to present his research results on hand-movement tracking and detection at the 12th International Conference on Ubiquitous Robots and Ambient Intelligence (URAI 2015), to be held on October 28-30, 2015, at Kintex in Goyang, Korea.

He will also present a research paper on remote collaboration at the ICAT-EGVE 2015 conference, the merger of the 25th International Conference on Artificial Reality and Telexistence (ICAT 2015) and the 20th Eurographics Symposium on Virtual Environments (EGVE 2015), which will take place on October 28-30, 2015 at the Kyoto International Community House, Kyoto, Japan. 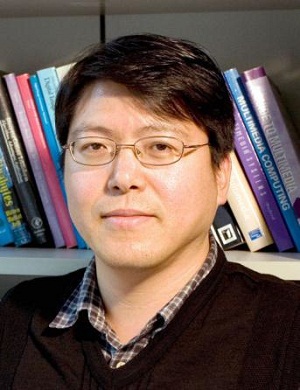