With the addition of holographic diffusers or frosted glasses to wavefront modulators, KAIST researchers offer a simple and practical solution to significantly enhance the performance of 3D dynamic holographic displays by 2,600 times.

The potential applications of three-dimensional (3D) digital holograms are enormous. In addition to arts and entertainment, various fields including biomedical imaging, scientific visualization, engineering design, and displays could benefit from this technology. For example, creating full-sized organs for 3D analysis by doctors could be helpful, but it remained a challenge owing to the limitation of hologram-generation techniques.

3D holograms, which often appear in science fiction films, are a familiar technology to the public, but holograms in movies are created with computer graphic effects. Methods for creating true 3D holograms are still being studied in the laboratory. For example, due to the difficulty of generating real 3D images, recent virtual reality (VR) and augmented reality (AR) devices project two different two-dimensional (2D) images onto a viewer to induce optical illusions.

However, the biggest limitation to using these modulators as 3D displays is the number of pixels. The large number of pixels that are packed into high-resolution displays developed in recent years are suitable for a 2D image, and the amount of information contained in those pixels cannot produce a 3D image. For this reason, a 3D image that can be made with existing wavefront modulator technology is 1 cm in size with a narrow viewing angle of 3 degrees, which is far from practicable.

As an alternative, KAIST researchers used a DM and added two successive holographic diffusers to scatter light. By scattering light in many directions, this allows for a wider viewing angle and larger image, but results in volume speckle fields, which are caused by the interference of multiple scattered light. Random volume speckle fields cannot be used to display 3D images.

To fix the problem, the researchers employed a wavefront-shaping technique to control the fields. As a result, they succeeded in producing an enhanced 3D holographic image with a viewing angle of 35 degrees in a volume of ​​2 cm in length, width, and height. This yielded a performance that was about 2,600 times stronger than the original image definition generated when they used a DM without a diffuser.

Professor Park said, “Scattering light has previously been believed to interfere with the recognition of objects, but we have demonstrated that current 3D displays can be improved significantly with an increased viewing angle and image size by properly controlling the scattered light.”

Hyeonseung Yu, who is the lead author of this research article and a doctoral candidate in the Department of Physics, KAIST, noted that this technology signals a good start to develop a practical model for dynamic 3D hologram displays that can be enjoyed without the need for special eyeglasses. “This approach can also be applied to AR and VR technology to enhance the image resolution and viewing angles,” added Yu.

The size and viewing angle of 3D images can be simultaneously increased when a scattering medium (diffuser) is introduced. By controlling the wavefront impinging on the scattering medium, the desired 3D hologram is generated. 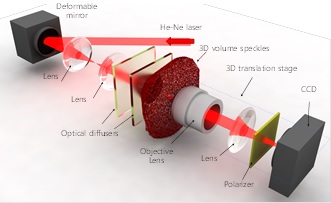 The optical set-up consists of a deformable mirror and the scattering medium with two successive holographic diffusers. A high-numerical-aperture imaging unit mounted on a three-axis motorized translational system is utilized for wavefront optimization and imaging.

This picture shows 3D images in a volume of 2 cm × 2 cm × 2 cm with a viewing angle of 35 degrees using one of the wavefront modulators, a digital micromirror device (DMD). 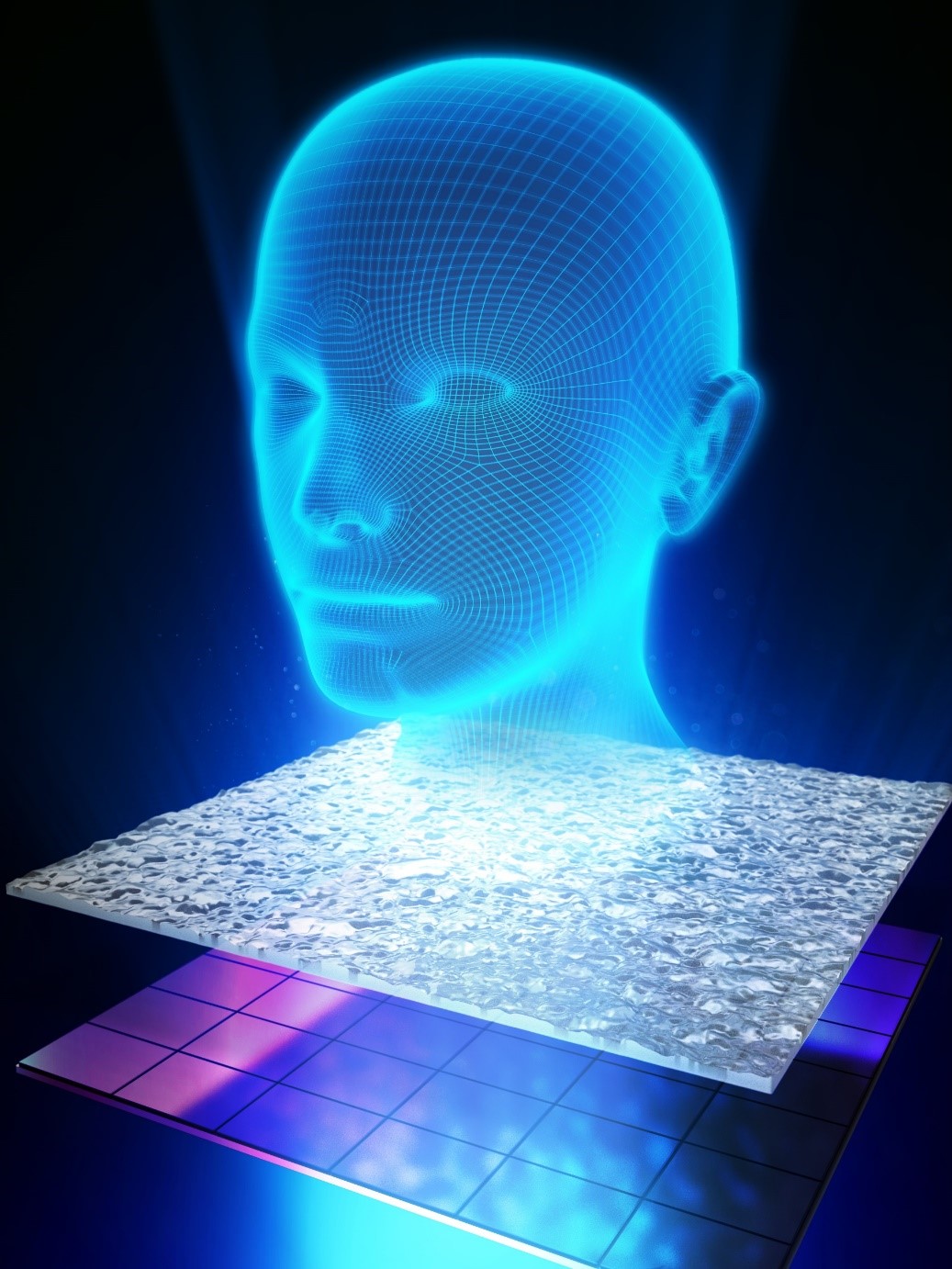 A dynamic 3D hologram of a face is displayed.