Dr. Leon Ong Chua is a circuit theorist and professor in the Department of Electrical Engineering and Computer Sciences at the University of California, Berkeley. He visited KAIST on April 16, 2014 and gave a talk entitled “Memristor: New Device with Intelligence.”

Dr. Chua contributed to the development of nonlinear circuit theory and cellular neural networks (CNN). He was also the first to conceive of memristor which combines the characteristics of memory and resistor. Memristor is a type of resistor, remembering the direction and charge of electrical current that has previously flowed through the resistor. In other words, memristor can retain memory without power. Today, memristor is regarded as the fourth fundamental circuit element, together with capacitors, inductors, and resistors.

In 2008, researchers at Hewlett-Packard (HP) Labs developed the first working model of memristor, which was reported in Nature (May 1st , 2008).

In addition, Dr. Chua is an IEEE fellow and has received numerous awards including the IEEE Kirchhoff Award, the IEEE Neural Network Pioneer Award, the IEEE Third Millennium Medal, and the Top 15 Most Cited Author in Engineering Award. 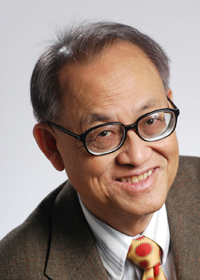