The Nature Publishing Index 2013 Asia-Pacific has been released today. The index is a supplement to Nature, which measures the output of research articles from nations and institutes published in the 18 Nature-branded primary research journals over the calendar year.

A press release from the Nature Publishing Group follows below:

South Korea ranks fourth for scientific research output in the region, according to the Nature Publishing Index 2013 Asia-Pacific released today.

In 2013, the nation significantly increased its NPI output following a slight drop in 2012.
Named a possible ‘one to watch’ by the supplement editors, with high levels of investment in science and technology announced by both government and private enterprise, its NPI output is growing faster than China’s.

Last year’s number one, Yonsei University, could not maintain its exceptional 2012 NPI output and has dropped to seventh spot.

It is now just above a newcomer, the Institute for Basic Science (IBS), funded as part of the government’s increased investment in basic science. IBS plans to open 50 research centres by 2017 and will no doubt provide increasing contributions in the next few years.

To see the latest results for the region, and the Nature Publishing Index Global Top 100, visit the Index website at www.natureasia.com/en/publishing-index. The data posted on the website is updated every week with a moving window of 12 months of data. 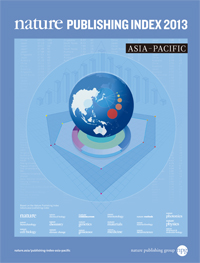