Domestic and international competitions for robots with artificial intelligence are organized by Professor Hoi-Jun Yoo of Electrical Engineering.

KAIST will host two robot competitions this year: The Robot Integration Festival will be held in August at the Convention Center in Daejeon and the International Robot Contest in October at the Kintex in Ilsan. Participating robots are developed based on the System on Chip (SoC).

SoC robots refer to an autonomous robot that has a processor, a memory, peripheral devices, logic, and other system components combined on a single chip, which enables the robots to handle tasks and make decisions without human intervention.

The competitions include three entries: Taekwon Robot, HURO-competition, and SoC Drone which was added for the first time this year.

The Taekwon Robot involves a one-on-one sparring match, using a Korean traditional martial art, between two robots. Competitors score points based on front and side kicks, as well as punching. The HURO-competition pits robots in a competition to perform assignments such as hurdling, barricade clearing, crossing bridges, and overcoming other obstacles. The SoC Drone evaluates robots' capability to track miniature cars and navigate between buildings while in flight. The drone should have two cameras and a SoC brainboard equipped to offer autonomous, remote-controlled flight.

The director of the competitions, Professor Hoi-Jun Yoo of Electrical Engineering at KAIST, commented that with the integration of Korea’s world-class semiconductor technology, the competitions would lead to improvements in robotics engineering and unmanned aerial vehicle technology.

The competitions are open to anyone interested in SoC robots and unmanned aerial vehicles. For more information about the competitions, please visit http://www.socrobotwar.org . The application deadline is April 15, 2014. 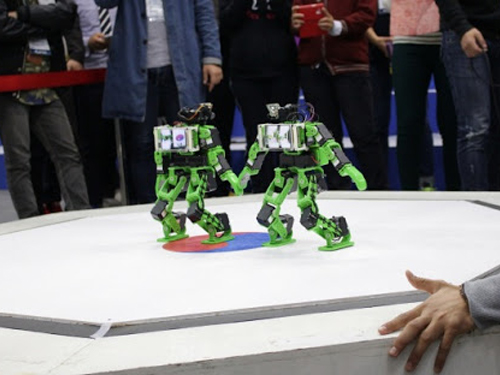