Former Minister of Science and Technology, Dr. KunMo Chung, Awarded KAIST Honorary Doctorate​
View : 5232 Date : 2014-02-21 Writer : ed_news
KAIST will confer an honorary doctorate on former minister of Science and Technology, Dr. KunMo Chung, at the 2014 KAIST graduation ceremony on Friday, February, 21.
Dr. Chung presented the Survey Report for the Establishment of the Korea Advanced Institute of Science (KAIS) to the United States Agency for International Development (USAID) in 1969. This proposal for nurturing the advanced science technology elite and boost Korean industrial development became the foundation for KAIS, which is now known as KAIST.
After passing the KAIS Foundation Law in 1970, Dr. Chung designed the faculty room, secured faculty members, and acquired a $6 million education loan from the USAID.
Dr. Chung devoted himself to research and teaching. His first appointment was the position of assistant professor at the University of South Florida, followed by research professor positions at the Princeton Nuclear Fusion Research Center and MIT Nuclear Engineering, and an associate professor position in the Department of Electrophysics at the Polytechnic Institute of New York.
When KAIS was founded on Feb. 16, 1971, 31-year-old Dr. KunMo Chung became the provost and a professor in the Electronic and Electrical Science Department where he made outstanding contributions to the development of science and technology in Korea. 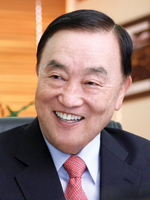