The result of the research effort was published as the frontispiece in the July 9th issue of Advanced Functional Materials, a world renowned material science and engineering academic journal.

Conventional processes require the high temperatures of 900~1,000 °C and the use of toxic or explosive vapors. Complex processes such as separation after synthesis and patterning are needed for application in electronic devices. The multi-step, expensive, environmentally unfriendly characteristics of nanomaterial synthesis served as road blocks to its mass production and commercialization.

Exposing the precursor to concentrated continuous laser beam (green wavelength) resulted in the synthesis of nanowires in the desired location; the first instance in the world to accomplish this feat. The technology, according to the research team, makes possible the production, integration and patterning of nanomaterials using a single process. Applicable to various surfaces and substrates, nanowires have been successfully synthesized on flexible plastic substrates and controlled patterning on the surface of 3-dimensional structures.

Dr. Yeo commented that the research effort has “yielded the creation of a nanomaterial synthesis process capable of synthesis, integration, pattern, and material production using light energy” and has “reduced the synthesis process time of nanomaterial to one tenths of the conventional process.” Dr. Yeo continues to devise steps to commercialize the new multifunctional electronic material and methods for mass production.

Picture I: Synthesized nanomaterials produced at a desirable location by laser beams

Picture 2: Synthesized nanomaterials built on the 3D structure by using the developed technology 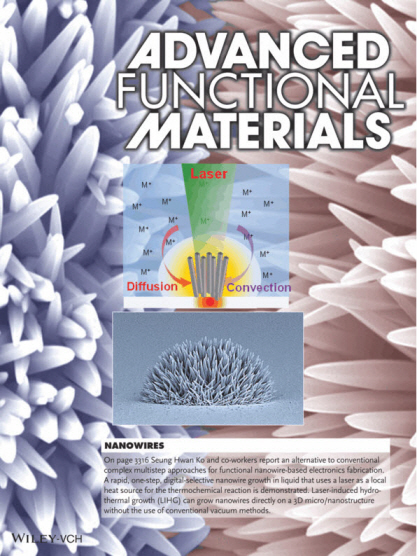