Representatives from Korea Advanced Institute of Science and Technology (KAIST), Khalifa University of Science, Technology and Research (KUSTAR), Emirate Nuclear Energy Corporation (ENEC), and the Institute of Applied Technology (IAT) had a meeting on mutual cooperation at the Intercontinental Hotel in Abu Dhabi, the United Arab Emirates (UAE), on January 14, 2009.

A press conference on the training of skilled manpower for research and development (R&D) in the UAE followed afterwards.

At the end of December in 2009, a Korean consortium led by Korea Electric Power Corporation (KEPCO) beat bids from its competitors to construct four nuclear power plants in the UAE.  Representing the consortium, Minister Kyung Hwan Choi of Knowledge Economy Ministry signed a comprehensive agreement with KUSTAR and the Institute of Applied Technology (IAT) for the delivery of nuclear power plants.

On his visit, President Suh discussed with KUSTAR the agreement above in greater detail on subjects, where KAIST renders its cooperation, such as research collaboration, university degree program, and training to produce qualified personnel necessary for the development of UAE’s nuclear energy industry.

On research collaboration, sharing its expertise and knowledge accumulated years from the operation of academic and research programs, KAIST agreed to provide cooperation to KUSTAR in developing the latter as a leading science, technology, and research university in ten years through mutual activities such as research collaborations, recruitment and exchange of outstanding researchers and graduate students, expansion of research facilities, and creation of major research policies.  Furthermore, in support of nuclear energy program in the UAE, KAIST agreed to develop a joint research program in nuclear engineering and exchange faculty members and students for research collaboration.

On a university degree program, KAIST agreed for mutual cooperation to launch academic programs at KUSTAR, covering BSc, MSc, and PhD degrees to specialize in areas such as mechanical engineering, electrical engineering, nuclear engineering, biomedical engineering, nano technology, science, and information technology.  To that end, KAIST will dispatch its faculty to KUSTAR; provide assistance in developing curriculum and teaching materials; and exchange students for research collaboration.

President Arif of KUSTAR mentioned that the university will cooperate with the relevant institutions in Korea, i.e., Korea Development Institute (KDI) and the Korea Institute of Nuclear Safety (KINS), to train skilled workers required for the development of nuclear energy program in the UAE.

He also added, “These cooperative programs will introduce more educational opportunities to our students, and as a result, they can make greater contributions to the development of our nation’s future technologies in various areas.  Our students will have a chance to study a broad range of academic subjects through partnership made with the Republic of Korea, and I expect to see improvements in our engineering programs by integrating KAIST’s state-of-the-art academic courses into our system.”

President Arif expressed his hope “to increase cooperation beyond the agreement made between the two countries, like allowing more exchanges and interactions with KAIST for the development of science and technology in Korea and the UAE.”

“Establishing mutual cooperation between KAIST and KUSTAR is a historic event not only for our two universities but also for our two countries.  The two universities will make a great contribution to the improvement of the future of humanity by working together to solve the most important, difficult issues faced in the 21st century,” said President Suh.

He also said that “all members of KAIST community will make our utmost efforts to advance the quality of education in two schools and to implement innovative researches through mutual cooperation.”

KUSTAR, a national university in the UAE, was founded on February 13, 2007 by a mandate of the current President Shaikh Khalifa Bin Zayed Al Nahyan to create a higher education institute.

KUSTAR has been building its permanent campus in Abu Dhabi, the capital of UAE since establishment and merged with the campus in Sharjah (formerly known as Etisalat University College with 18 years of history) in 2008.  The University offers education and research programs in five disciplines of engineering, logistics and management, health science, homeland security, and applied science.

There are more or less 30 foreign accredited universities set up in the UAE from countries like the US, UK, Australia, France, Ireland, and Canada.  Examples of such, among other things, are New York University Abu Dhabi campus and Middlesex University Dubai campus.


Attachment: Current Status of Universities in the UAE as of 2009

The UAE has the world"s sixth largest oil reserves.  As of 2008, its gross domestic product is $2,621,000.5 million and its nominal per capita gross domestic product is $5 5,028, becoming one of the most developed economies in the Middle East.  The UAE’s total population as of the said year is 4,760.4 thousand, and its purchasing power per capita is 40th largest in the world.  The UAE’s Human Development Index for Asian continent is relatively high, ranking 31st globally.

In 1985, the UAE launched its own airline, Emirates Airline, which has become one of the fastest growing airlines in the world.  The Emirates Airline is a sponsor for Arsenal soccer club.

The Republic of Korea established full diplomatic relations with the UAE in June of 1980.  On December 27, 2009, a Korean consortium led by Korea Electrical Power Corporation (KEPCO) signed a contract with the UAE to build nuclear power plants. 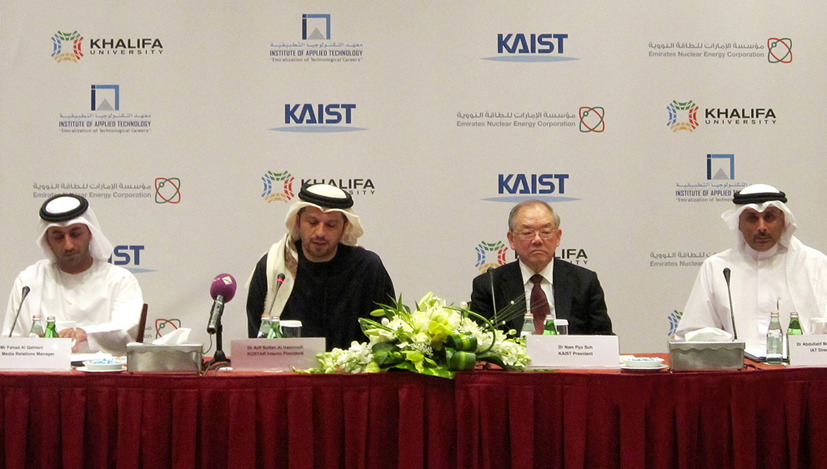