Renowned musicians in five international locations perform new contemporary music works for peace through a real-time performance on the internet. Local audiences in Seoul, Banff, New York, San Diego and Belfast will also have a chance to hear a program.

In Seoul, the "International Telematic Music Concert for Peace" will be held at the LeeHaeRang Art Theater, Dongguk University, in Seoul on Nov. 20 at 9:30 a.m., under the presentation of KAIST"s Graduate School of Culture Technology and MARTE Lab, Dongguk University. Telematic music is real-time performance via the internet by musicians in different geographic locations.

The program of the concert includes "Hope"s Dream" by Mark Dresser and Sarah Weaver; "Disparate Bodies" by Pedro Rebelo, "Rock, Paper, Scissors" by Chris Chafe. The Korean act to be performed is "Green-colored Harmony" by Jun Kim.

In addition to the two Korean universities, the World Association of Former United Nations Internes and Fellows (WAFUNIF),  University of California San Diego, the Banff Center of Canada and Queen"s University in Belfast are participating in the project.

"Connecting the five different cities together through super-speed Internet network and transmitting sound and images in real time is challenging technically. But, we also expect that more exciting results will be created in the course of transforming the sound into visual images," said Woon-Seung Yeo, a professor of the Graduate School of Culture Technology, who was responsible for visuals in the project. 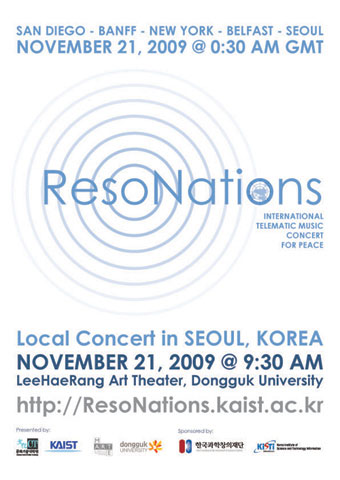